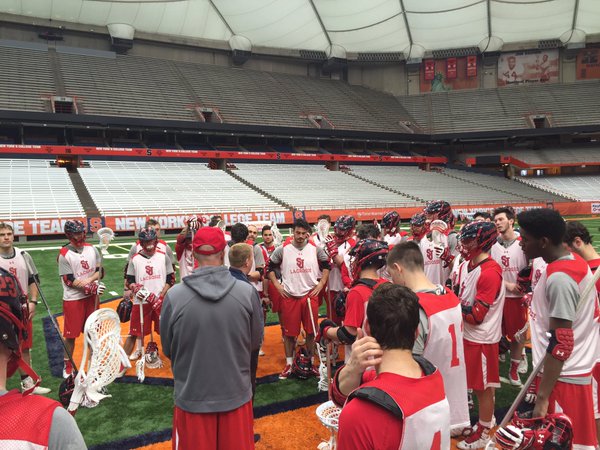 St. John's took a 15-4 shellacking against No. 3 Syracuse at the Carrier Dome on Mar. 12 (Photo: Twitter/@StJohnsLax)

The Red Storm men’s lacrosse team was defeated by a score of 15-4 against a highly touted and No. 3 team in the nation of Syracuse in the Carrier Dome on Saturday afternoon. The loss drops the Johnnies to a (1-6) record while the Orange improved to (5-0) in the 2016 season.

Time of possession was the biggest factor to Syracuse’s win. The Orange added to their third best winning faceoff percentage by winning 81% (18-22) of the face-offs and managed to rack up 54 shots as well, including an incredible 19 in the opening quarter. Also, in the possession game, Syracuse tallied 37 ground balls compared to 19 for the Red Storm.

Syracuse opened up an early 6-1 lead after the first quarter, which gave them enough of a cushion to have a comfortable lead for the final three. Syracuse’s defense was another factor that helped give them the edge. They were a perfect 17 for 17 on clears and managed to force 19 Red Storm turnovers.

Redshirt Senior, Eric DeJohn, put St. John’s on the board and ended a six-goal run by the Orange. DeJohn, who is from Syracuse, recorded his 50th career goal as a Johnny and became the 8th player in program history to join the 40-40 club that consists of 40 goals and 40 assists in a career.

The last goal was courtesy of a blast from midfielder Nick Heller. The junior made a run from his position at the midfield line and fired a shot passed the Syracuse goaltender with 12:05 remaining in the game.

Other statistics for the Red Storm include sophomore Justin Corpolongo winning 2 of 14 faceoffs and redshirt junior Jack Lally winning 2 of 8 faceoffs on the day. Also, redshirt freshman Michael O’Keefe picked up eight saves when he entered the game in the second half.

Coming up next for the Red Storm is an away non-conference matchup with the Dragons of Drexel University next Saturday at Vidas Field in Philadelphia, Pa., on March 19, at 1 p.m.