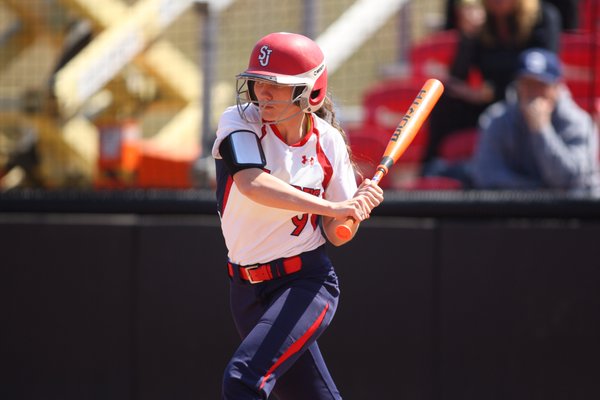 After last weekend’s second place finish at the Tennessee Invitational, the softball team headed to Hempstead, New York to compete in the Hofstra Invitational this weekend. The team played Connecticut and Hofstra two times each and finished the tournament 0-4.

The weekend began with a game against the University of Connecticut Huskies. Connecticut opened the scoring in the first inning with three runs off of two hits. The early lead was increased to four points in the third inning after a scoreless second inning. The top of the fifth inning saw two consecutive singles by Lauren Zick and Yvonne Rericha but the team couldn’t bring them home because of three outs in a row pitched by Connecticut’s starting pitcher, Chelsea Eckert. In the bottom of the inning, the Huskies scored one more. After scoreless sixth and seventh innings, the game ended with another shutout score of 5-0.

In its second game of the tournament, the Storm took on the hosts of the tournament. This time around, the opposition couldn’t keep St. John’s off the scoreboard. After two scoreless innings to start the game, the Storm opened scoring in the bottom of the third. But Hofstra was unstoppable in the fourth. The Pride scored five runs. The seventh inning looked promising for the Storm. They had the bases loaded but couldn’t convert. The match ended with a fly ball by Rericha. Her out confirmed the Hofstra win.

Sunday began with another game against the host team and the Pride surely carried their success over into the last game day. The first inning ended without seeing any runs but Hofstra gained momentum and scored six runs in the second. The hosts hit two home runs against starting pitcher Grace Kramer. She was relieved by freshman Madison Morris after only one out. Hofstra scored another run in the fourth and Kramer was put back on the mound. The game finished with a double and another Hofstra point making the final score 8-0.

To end the weekend, the Storm was able to do a little better in a second game against the Huskies losing 7-4. The first inning ended with a level playing field of 2-2. The Huskies scored a two-run homer and the Storm answered with a double hit by Krystal Puga which brought both Rericha and Hannah Anderson in to home plate. Connecticut scored a point in both the third and fifth innings but the Storm was able to answer again and tied it up 4-4 in the bottom of the fifth. The Huskies started to pull away with the lead in the sixth when four consecutive singles led to a point. The final inning saw to more Connecticut runs and no answer from the Storm.

The Red Storm will play Stony Brook it its home-opener on Wednesday at 2:30 p.m.