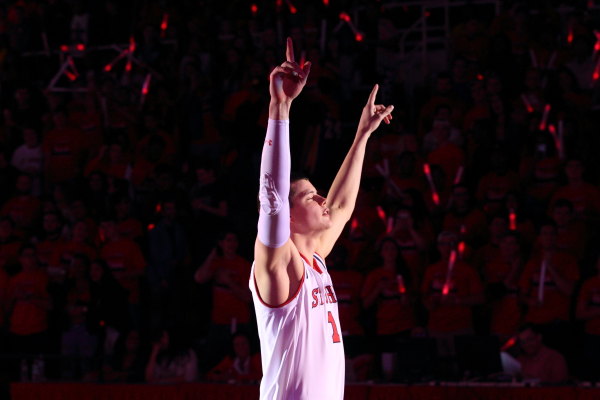 In a matter of a week, the final two holdovers from the Steve Lavin era have moved on from the St. John’s program.

Sophomore forward Amar Alibegovic has decided to transfer, while redshirt junior Christian Jones has opted to explore his options at the professional level and on the graduate transfer market.

Alibegovic, who was recruited as a stretch four, was unable to crack the Johnnies seven-man rotation consistently in year one. He played just 8.5 minutes per game, averaged 1.6 points per outing, shot an ugly 25 percent from downtown and struggled to adjust to the pace at the college level.

In year two under Chris Mullin, the Rome, Italy native received quality minutes (15.9 mpg), found his rhythm from beyond the arc (30 percent) and showed he is capable of producing off the bench. Alibegovic had career performances in an upset win over Syracuse (15 points and nine rebounds) and in a closer than expected match-up on the road at Villanova (18 points and six rebounds).

He also dropped 17 points in the Johnnies win over Chaminade in the Maui Invitational and like most of the young players on the roster, he showed valuable development over the course of the season.

On the downside, Alibegovic was still a liability on the glass and on the defensive end. He will also need to be more consistent at his next stop.

Meanwhile, Jones has dealt with plenty of ups and downs throughout his St. John’s career. He played almost 10 minutes per game during his freshman year, but redshirted in year two and was often visibly frustrated with his lack of playing time in year three.

The floodgates opened in his redshirt junior season though, as Jones put together a breakout year that consisted of four double-digit point totals in his final four games. The 6’7” forward from Texas dropped 29 points against Marquette in the Big East Tournament and averaged a total of 8.4 points per game over the course of the season.

Jones averaged 5.2 rebounds per night (which was a career high), shot 48 percent from the field and often stretched the floor for the Red Storm.

The junior is undersized and likely won’t find his way onto an NBA roster, but he could have immense success as a graduate transfer or develop his skills in the D-League or overseas.

With the departures of both forwards, Mullin has two extra scholarships to work with and the Johnnies should be active with transfers. The Red Storm has impressive depth and versatility up and down their roster but they could really use a physical big that can give the team a different dimension on the interior.

With Kassoum Yakwe, Yankuba Sima, Tariq Owens and Darien Williams expected to take huge steps in their second offseason, the Johnnies could mold into a dangerous frontcourt if they add another big.