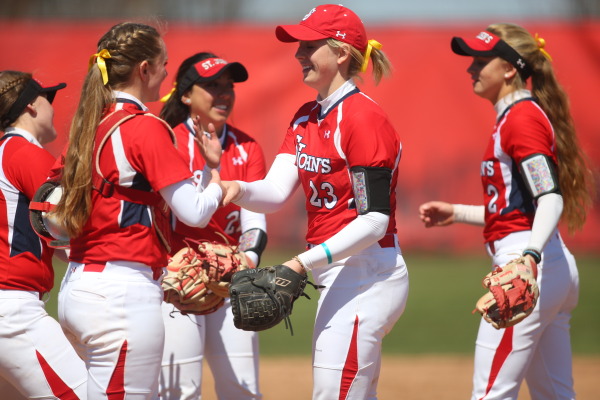 Two superb pitching performances led the St. John’s women’s softball team to a doubleheader sweep of St. Peter’s on Wednesday, April 6. The Red Storm, who snapped a three-game losing streak, won game one 8-0 and dominated the Peacocks in the second showdown of the day 6-0.

Grace Kramer was masterful in the first game, going the distance while allowing just one hit and three walks. She set the tone right from the start, striking out the side in the order.

It wasn’t just Kramer’s lively repertoire that willed the Red Storm to victory. The offense began early with a Christina Melendez RBI single up the middle in the bottom of the second. They would tack on four more before St. Peter’s made a call to the bullpen and finally got the first out of the inning.

Kramer’s no-hit bid was broken up by Jackie Riley’s leadoff double in the fourth, but got two of the next three batters to strike out to escape without harm. Lauren Zick brought home a run with a single in the bottom half of the fourth, then Brittany Garcia’s sacrifice fly and a St. Peter’s throwing error brought the game to 8-0 in favor of the Red Storm.

Kramer ended the game the way she started with three electrifying strikeouts to cap off a run-rule victory.

McKenzie Murray got the call for St. John’s in the second match-up. She also tossed a complete game, surrendering just four hits without walking a single batter. The Red Storm’s offense was on top of its game yet again, this time getting off to a quick start in the bottom of the first.

Garcia began the inning with a long home run before Krystal Puga walked to put a runner on first for Savannah Warren. Warren came through with an RBI double into the right-center gap to put the lead at 2-0 after one.

Monique Landini smacked another Red Storm long ball, this time to straightaway centerfield, to put St. John’s up 3-0. Carly Williams got a hold of one and put it over the centerfield wall in the bottom of the fourth to give Murray and the Red Storm even more breathing room.

Murray’s perfect game bid was broken up in the top of the sixth by Sydney Ramsey’s infield single. St. Peter’s got two runners on with none out, but Murray was able to record two outs before hitting Kristen Kelley to load the bases. She was able to strikeout Riley, ending the threat.

One more insurance run in the bottom of the sixth set the stage for Murray’s shot at a complete-game shutout victory, which she secured with ease in the top of the seventh.

St. John’s will look to protect its eight-game home winning streak as they take on Butler in a three-game series this weekend.