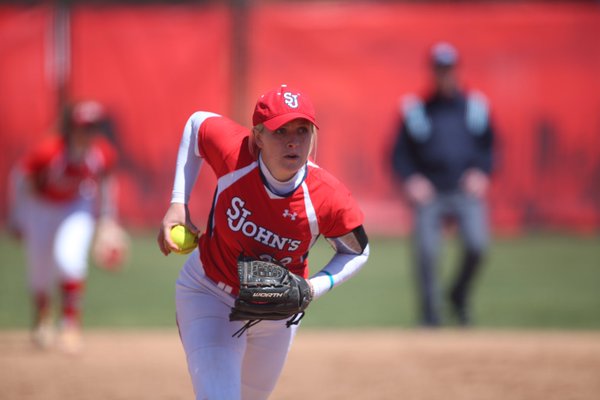 Grace Kramer struck out 11 and allowed four runs to lead the Red Storm to a win in game one on Sunday. (Photo: Twitter/@StJohnsSoftball)

Softball split its doubleheader against Butler this weekend at St. John’s. Both games were scheduled for Saturday, but rain held them off until Sunday.

Game one started on Saturday with a scoreless first inning, but the Johnnies scored two runs in the second inning to take the lead early. St. John’s led off the inning with a walk by Krystal Puga before freshman Christina Melendez hit a home run – her third of the season – off the first pitch she saw.

Butler tied the game with a two-run single in the third inning. The rain remained constant so the day ended with an even score.

The fourth inning resumed on Sunday morning with St. John’s recapturing the lead in the fifth. Carly Williams hit her twentieth RBI of the year with a single that brought Savannah Warren home.

In the sixth inning, the Johnnies scored three more runs to extend their lead to four after junior Brittany Garcia hit a double with both Monique Landini and Hannah Anderson on base.

Butler was able to score two in the seventh but couldn’t quite complete its comeback and earn a win over the Red Storm.

Grace Kramer, who won Big East Player of the Week on Monday, capped off a complete game as she allowed four runs on six hits and recorded 11 strikeouts.

The weekend opener ended 6-4 and the teams were given a short window of recovery before a rematch later in the day.

Game two began with an early Bulldogs lead. The team had two outs and the bases were loaded when Chelsea Norwood hit a two-run single. This was the first time Butler held a lead in the series.

In the bottom of the inning, Lauren Zick crossed home plate after she hit a single. and Butler then committed an error, giving both Anderson and Zickher an opportunity to steal. Zick’s run cut the Bulldog lead to one run until Warren hit her third home run of the season in the second tying the game at 2-2.

The score stayed even at two apiece until an unlucky seventh inning. Errors by both catcher Kaitlyn Wilkens and center fielder Brittany Garcia allowed Bulldog Jenna Foreman to pinch run for teammate Brandyce Sallee, who hit a leadoff single. She came around to score after stealing second base.

The split weekend ends the Johnnies clean sheet at home. The team is now 19-17 (3-5 in conference play). Next weekend, St. John’s will visit Providence for a three-game series.