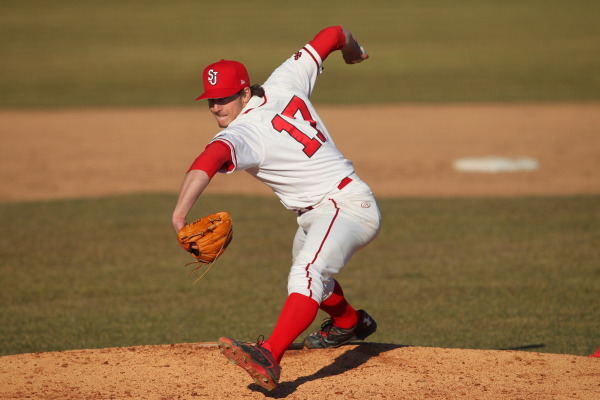 The St. John’s baseball team won its second straight series to open up Big East play, as the Red Storm won two of three on the road at Villanova over the weekend.

The Red Storm (19-13-1) rebounded from a 7-2 series opening loss on Friday to take the next two games of the series, winning 6-1 on Saturday and closing out the weekend with a 5-2 win in the rubber game on Sunday.

The story of the loss in game one for St. John’s was a lack of offense. The Johnnies had just four hits that afternoon as they dug themselves into a 7-0 hole after just four innings of play.

The Red Storm trailed 4-0 after three innings, but a three-run fourth inning from Villanova dug St. John’s an even deeper hole. The Johnnies pitching staff did not allow a hit from the fourth inning on, however they’re offense wasn’t enough to threaten the Wildcats lead.

Third baseman Robbie Knightes went 1-for-3 with an RBI single to drive in second baseman Josh Shaw in a two-run seventh for St. John’s. Shaw extended his hitting streak to 12 games with a single earlier in the inning.

The Red Storm rebounded nicely from their game one loss the next day, led by some spectacular pitching from junior starter Ryan McAuliffe. The right-hander shut down the Villanova offense through eight innings, as he allowed just one earned run on seven hits.

McAuliffe’s offense gave him more than enough support early to make it an easy afternoon for St. John’s. The Johnnies were aided by three Villanova errors in the second inning as they pounded out four runs to take an early lead.

Knightes, designated hitter Mark Venice and right fielder Alex Caruso all drove in runs in the inning, and Caruso would later score after a wild throw on a stolen base attempt to make it 4-0 St. John’s.

After McAuliffe’s solid eight innings of work, he handed things off to his shutdown reliever Thomas Hackimer. The senior closed out the game with a 1-2-3 ninth inning that featured a pair of strikeouts.

In game three, the Johnnies trailed 2-1 heading into the sixth inning, however in the top of the sixth they scored two runs to give them a lead they would not relinquish.

Caruso led off the inning with a single and would later score on an error, while an RBI single from catcher Troy Dixon scored left fielder Michael Donadio to give the Red Storm a 3-2 lead.

St. John’s added a pair of insurance runs in the eighth and ninth to extend its lead to 5-2, and from there Hackimer once again shut the door to give the Red Storm the series win.

Hackimer worked 2.2 perfect innings on the afternoon to pick up his fifth save of the season, as he struck out three of the eight batters he faced. He has now allowed just one earned run in 30.1 innings of work this season.

The series win improved the Red Storm’s conference record to 4-2 on the season, good for second in the Big East. They’ll face Xavier on the road for a three-game set next weekend.