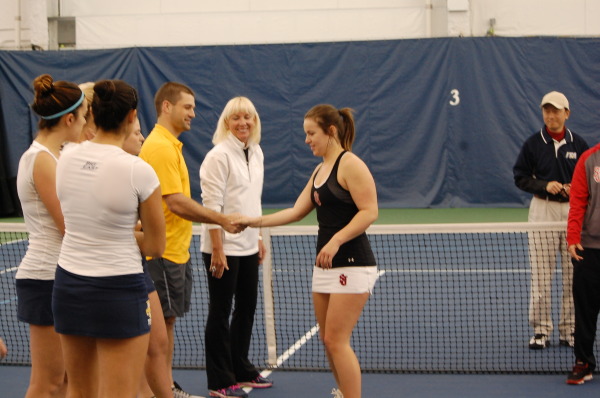 In the penultimate matchup of the season, the St. John’s women’s tennis team earned its seventh sweep of the season after blanking Fordham 7-0. The Red Storm has now won five-straight matches and eight of its past 10.

The top doubles team, consisting of juniors Natallia Vavulina and Anna Morozova, got the Red Storm going with a 6-2 victory. It’s the third-straight win for this duo playing at the No. 1 spot. Junior Stephanie Elgegren and freshman Delia Arranz clinched the doubles position with a 6-3 win at the No. 2 position.

The last doubles match of the day was at the No. 3 spot where sophomores Jaide Collins and Zofia Stanisz won their match 6-4. It was the first time this season the sophomores teamed up after playing most of last season together.

The Red Storm kept the momentum going as the match rolled into singles play. Arranz earned the first singles point of the afternoon with a 6-3, 6-1 win at the No. 5 slot. It was her second victory of the day and she has now won four-straight singles matches.

At the No. 1 singles position, Vavulina notched a 6-1, 6-1 triumph for her 10th-straight victory in singles play. Her combined record this season now stands at 27-5.

The match-clinching victory belonged to freshman Olava Inclan at the No. 4 spot, where she won 6-3, 6-3. She has now won 10 of her last 12 matches in singles play. At the No. 6 position, Collins earned her second victory of the day with a straight-sets triumph.

Recently named Big East Player of the Week, Morozova claimed a 7-5, 6-2 win over Mayu Sato for her sixth-straight win in singles play. The final match belonged to sophomore Irina Preotescu. She recorded a straight-sets win at No. 3 singles to finish off the sweep for the Red Storm.

The Johnnies have now won four-straight matches against Fordham and did not drop a set for the fifth time this season.