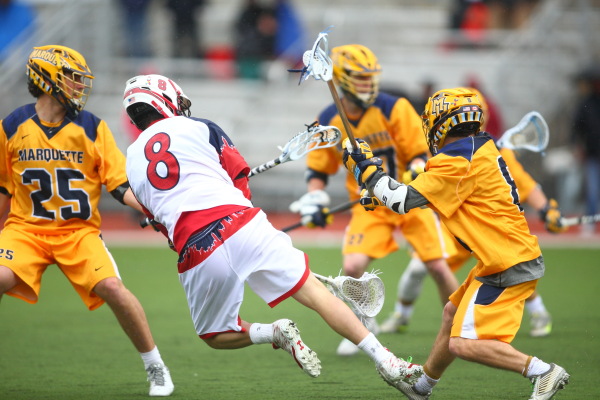 The first 30 minutes of a St. John’s men’s lacrosse game are intense and typically close, with the team neck and neck with whomever lines up across from them. But while it’s easy to drown in the Red Storm’s early game success, the team’s second half breakdowns are hard to ignore.

Saturday afternoon against No. 18 Villanova, the first half of the Red Storm’s penultimate regular season contest was one in which they took control early. They won faceoffs behind specialist Justin Corpolongo and scored five of the game’s first seven goals.

But that was just the beginning, as Villanova put together an impressive comeback that started a high-scoring affair between the two BIG East rivals.

The Wildcats scored seven goals in the second quarter to break out of their early slump, with six of the period’s nine goals coming in the first four minutes of play. Their sudden burst of energy was a catalyst for an 18-13 comeback win in Queens.

“We got down in the third quarter, but did a great job fighting back,” head coach Jason Miller said to RedStormSports.com. “We got stops to start the fourth quarter, but came up empty on some quick shots.

“I thought Dan Willis was great for them today. I don’t think we played the last four minutes well defensively, and they got three easy ones at the end. Unfortunately for us, close isn’t going to be good enough against teams of that caliber.”

Entering the game, St. John’s (1-12, 0-4 Big East) had lost eight straight, including all four Big East conference matchups. Since their March 5 win against Siena, which avoided an 0-5 start, the Red Storm have plummeted to last place in the conference.

In spite of Jason DeBenedictis’ first half hat trick, the Johnnies fell behind 9-7 at the break and started the third quarter with an exchange of goals.

With the third quarter closing and under ten seconds remaining, St. John’s cut the lead to 13-11 on a three-quarters length pass from goalkeeper Joseph Danaher to Eric DeJohn. DeJohn heaved a shot high enough to inch past Villanova’s goalkeeper with 0.5 seconds, giving the fans in attendance life as the final 15 minutes rolled around.

Three straight Villanova (8-4, 2-2 Big East) goals put them up 16-11 with under three minutes remaining in the final frame. Late goals by St. John’s were not enough, as the Wildcats prevented the Red Storm from winning their first conference game of the season.

St. John’s will play their final game of the season on Saturday, April 30 against the Georgetown Hoyas. Senior Day will be apart of the pre-game festivities, as co-captains Michael Paoline and James Bonanno, as well as DeJohn, Eric Moosbrugger, Ricky Cotton, Chris Hughes, Harry Burke, and Anthony Oddo, will be celebrated and honored.

The game is scheduled to begin at 1 p.m. at DaSilva Memorial Field.