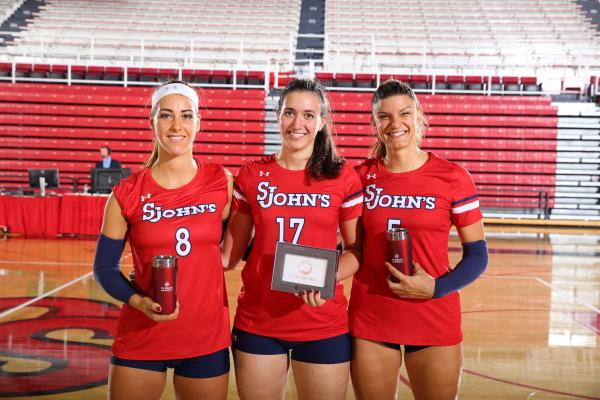 Erica Di Maulo, Margherita Bianchin and Gaia Traballi each were recieved recognition for their strong play over the weekend. (Photo Credit: RedStormSports.com)

The St John’s women’s volleyball team continued their hot start to the season this weekend by winning the 2016 Jack Kaiser Volleyball Classic.

The team took advantage of having the tournament on their home court and defeated Niagara, La Salle and Binghamton to win the championship.

The Johnnies won the second set by going on a 5-1 run to close it out. Di Maulo had 10 of her 51 assists and Bianchin registered two of 15 kills in the second frame.

The fourth set was a tight one with the Purple Eagles having a 23-22 lead until kills by Julia Cast, Traballi, and Bianchin helped the Red Storm to win the set and match.

Middle blocker Danish Moss was a force on defense with seven blocks. Coming off the bench, Amanda Sanabia had a strong debut for the Johnnies with six digs and four assists.

“It feels amazing to still be undefeated,” Moss said following their victory against Niagara. “My coach always said that the star of the team is the team, so I really just have to shout out my team because we are pushing and fighting for each other on the court.”

Cast contributed 11 kills and .400 hitting percentage, and Lexie Lobdell provided a spark off the bench with five digs and two assists.

The Red Storm dominated the first set winning 25-15 behind a .423 hitting percentage. Di Maulo tallied 11 of her 34 assists in the first frame and Traballi had four kills.

Leading 23-22 in the second set, Bianchin and Traballi teamed up for the winning point. Melissa Chin had three digs (six total for the game) in the set. The Red Storm were in some trouble in the third set, losing 7-2 before going on a 6-1 run to tie the score at eight.

The ending of the third set was intriguing with St. John’s holding a small lead of 23-22 but consecutive errors by La Salle helped the Johnnies to pull away to win the match.

The final game of the 2016 Jack Kaiser Volleyball Classic, the Red Storm sweep Binghamton to win the tournament.

Di Maulo was outstanding once again with 41 assists (match-high) and 11 digs. Traballi contributed with 14 kills and 14 digs. Moss made her presence felt on the defense with four blocks.

Di Maulo was named the 2016 Jack Kaiser Volleyball Classic MVP. Bianchin and Traballi made the All-Tournament. Next up for the Red Storm is the 2016 San Francisco Invitational that will start on Friday at 9:30 p.m.