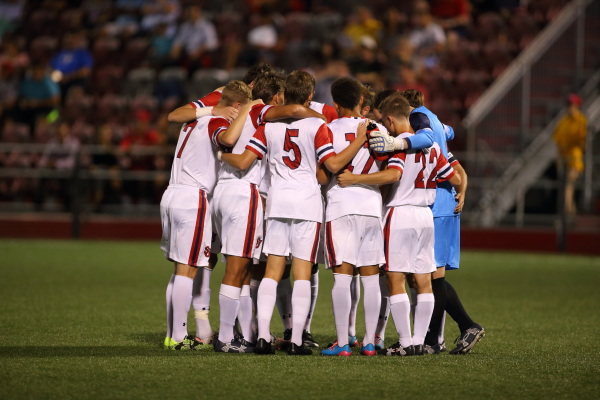 With a young sports team, the hope is always for the future. For the St. John’s University men’s soccer team, though, the future might come sooner than expected.

In a tightly contested match, the Johnnies were edged by 6th-ranked Syracuse University, 3-2 in double overtime. Jonathan Hagman scored in the 105th minute for the Orange to send the Red Storm home defeated, but with a promising outlook for the rest of the season.

The match began as a defensive struggle. The two teams combined for just six shots on goal through the first 45 minutes. The Orange could not connect on multiple crosses into the 18-yard box in the first 15 minutes, including an excellent punch-out by redshirt sophomore goalkeeper Andrew Withers to deny a cross off a gathered clearance.

St. John’s let one up just before the end of the first half. A corner kick from Oyvind Alseth glanced off Kamal Miller and Miles Robinson redirected it home to put the Orange up 1-0. Withers made two saves in the first half to keep the young Johnnies close to the reigning ACC Champions.

The Red Storm went on the offensive to start the second half. They took three shots in the first 10 minutes, the latter two on free kicks. They finally broke through in the 55th minute, when junior midfielder Harry Cooksley, who came on as a sub at the beginning of the second half, sent a curling corner into the box. Freshman midfielder Alistair Johnston leaped through traffic to flick the ball into the lower left-hand corner of the goal to tie the game.

Cooksley then put the Red Storm ahead just 10 minutes later with a highlight-reel goal past Hendrik Hilpert. Cooksley pulled left outside of the box and took a rip that curled around the goalie and in. The ball hit the back of the net just as Cooksley regained his footing and just like that, the Red Storm had a 2-1 advantage.

The Orange never lost their focus, however, and after a couple of near misses, including a header that hit the bar, they got even. Robinson put up his second goal of the game off a corner kick in the 82nd minute. A tense but uneventful final eight minutes sent the teams into overtime.

St. John’s did not get a shot off in either overtime period, but strong defense held Syracuse to just a pair themselves. The Orange were efficient, however, as their second shot won the match. Hagman sent home a volley from Robinson at the top of the box to give them the lead in the closing minutes.

It is a tough loss to swallow, but things are looking up for the Red Storm; they are off to their best start in the last three seasons. They look to continue their uptick on Thursday at Princeton.