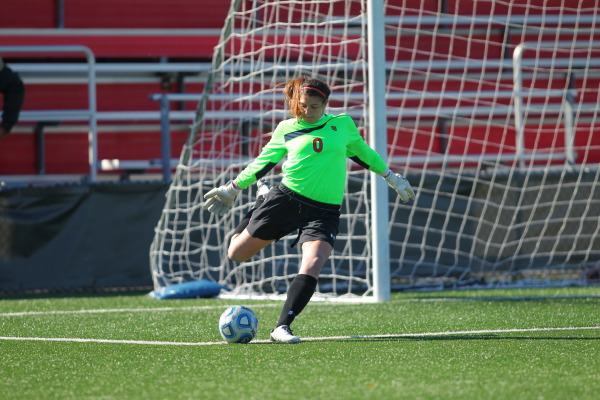 Goalkeeper Diana Poulin has been stellar in goal for the Red Storm this season. (Photo Credit: RedStormSports.com)

The St. John’s women’s soccer team suffered its first loss in the final game of the Nike Portland Invitational on September 11, losing to the Portland Pilots (4-1-2) 2-1. This ended the second-longest undefeated streak in school history with seven games. The seven-game winning streak to open the season for the Red Storm (4-1-3) is only behind the ECAC Championship squads of 2002 and 2007 (eight).

Diana Poulin, two-time BIG EAST Goalkeeper, picked up her first loss of the season despite matching a season-high five saves. Poulin maintains a goals against average of 0.35, the top in the conference.

In the 29th minute, Mikhaila Martinov scored her first career goal for the Johnnies after Samie Scaffidi sent a corner kick from the left side. Martinov got a touch on the ball as she was falling to the ground, sending past the goalkeeper.

The Pilots scored again in the 64th minute, when Allison Wetherington sent the ball directly into the goal on a corner kick.

On September 9th, the Red Storm played Washington to a scoreless tie in the opening match of the Nike Portland Invitational.

Washington held the advantage outshooting the Red Storm 14-6 and had 16 corner kicks to the Johnnies’ three. Three of the six shots for the Red Storm were on target.

The draw leaves Washington with a record of 4-1-1; they were only two spots out of the NSCAA Coaches’ Poll on Tuesday, September 5th.

Poulin registered five saves. This leaves her with five shutouts this season, tying her for the national lead in that category.

“We battled hard against a perennial NCAA Tournament caliber team today,” Head Coach Ian Stone said in a press release. “I was proud of our team’s effort.”

Friday marked the fourth time in seven games this season that the Red Storm has seen overtime. No St. John’s team has dealt with this much overtime since the ECAC Championship season of 2002.

The Red Storm will have a week off before its next game, when the Johnnies host La Salle at Belson Stadium for a 1 p.m. kick off.