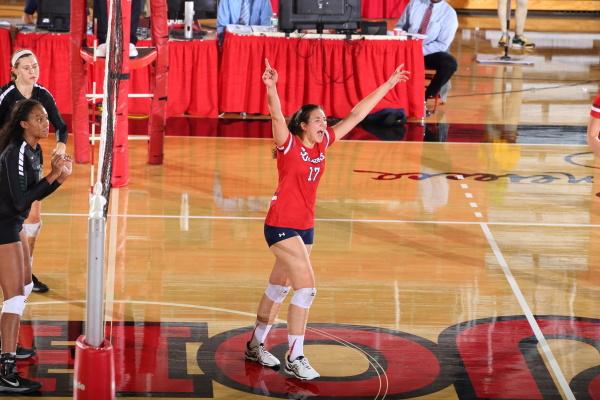 The St. John’s women’s volleyball team went on the road to play three matches in two days at the San Francisco Challenge. Friday, they faced off against San Francisco in their opening match and pulled in an impressive sweep victory (25-14, 25-17, 25-10). They came out strong setting their season-high hitting percentage at .429, keeping San Francisco at a -.034 attacking percentage, recording 40 digs, and forcing their opponent to 23 attacking errors.

Erica DiMaulo recorded a match-high 28 assists as she continues to lead all freshmen in the country in assists per set. Melissa Chin logged a career-high 11 digs, while Julia Cast and Gaia Traballi each went for 11 kills. The team remained undefeated for the night, enhancing their record to 7-0

Saturday afternoon, the Red Storm went up against UC Santa Barbara and lost their first match of the season (25-16, 22-25, 22-25, 23-25). Erica DiMaulo performed spectacularly again, recording 38 assists to go along with 11 digs. Margherita Bianchin, Gaia Traballi, and Julia Cast all logged double-digit kill matches with 14, 12, and 11 respectively.

The game was very close; St. John’s won in attacking percentage with a .222, compared to the Gauchos’ .211. It came down to the wire as the fourth and final set began to come to a close, the Johnnies led 22-20, only to allow five of the next six points and suffer a tough loss.

The Red Storm women did not let this get to them, however, as they took on Brown later that night for their final match of the Challenge and came away with a rebound win (25-7, 25-23, 25-23). This was a dominant victory as they kept Brown to a .094 hitting percentage, while beating them out in digs (37 to 24) and blocks (12 to 4) and notching an impressive .329 attacking percentage.

Julia Cast had a great match, recording 15 kills, .542 attacking percentage, 4 blocks, and 17.5 points produced. Freshman Erica DiMaulo once again stuffed stat sheet in the assists category with 33 to go along with 8 digs. Danisha Moss and Mona Karkkainen also produced solid outings as Moss recorded 6 kills and 6 blocks and Karkkeinen racked up 5 kills at a .714 rate.

All in all, the Johnnies came out of the Bay Area with a season record of 8-1. They will remain on the road for their next match as they move to the neighboring state of Connecticut to take on Fairfield.