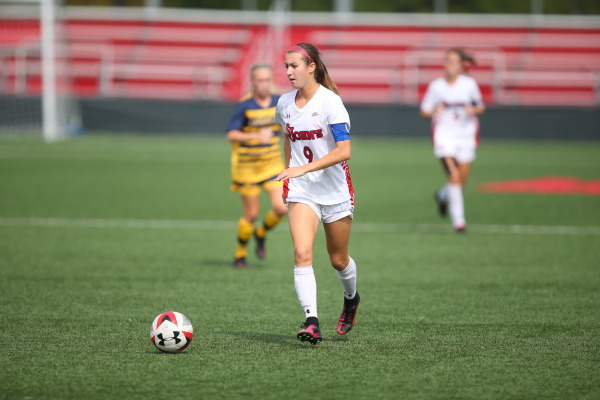 Shea Connors scored the lone goal of the game to push the Red Storm ahead. (Photo Credit: RedStormSports.com)

Junior Shea Connors scored the deciding goal with just 8:57 left in regulation, taking a pass from sophomore Lucy Whipp and sneaking the ball into the bottom right corner of the net for the game-winner.

“I think La Salle is a very tough team and they’re going to be right at the top of their conference this season because they just fight right until the end,” head coach Ian Stone said.

Poulin stopped five La Salle shots en route to her league-leading sixth shutout of the season. The winningest goalie in Red Storm history adds to her legacy as her goals against average now sits at just 0.31, while her save percentage climbed to .893 in the victory.

Connors’ deciding goal was her second of the season and her seventh point overall; she leads the team in both of those categories.

“[Assistant Coach] Jen Leaverton has done a lot of work with Shea over the course of the last week in terms of her finishing, so when Shea came off I said `great goal’ and she said ‘Jen taught me how to do that this week’ so if Jen keeps working her magic like that and Shea keeps putting the ball in the back of the net, then that’s fine with me,” Stone said.

“I think this match was exactly the challenge that we needed going into BIG EAST play,” said Stone. “I thought we had some good opportunities, but obviously in the game of soccer they don’t always go in, so I thought we were patient in continuing to create opportunities and that’s a good win against a tough team”

St. John’s will begin BIG EAST play on Saturday when they travel to South Orange, N.J. for a 2 p.m. match against Seton Hall.