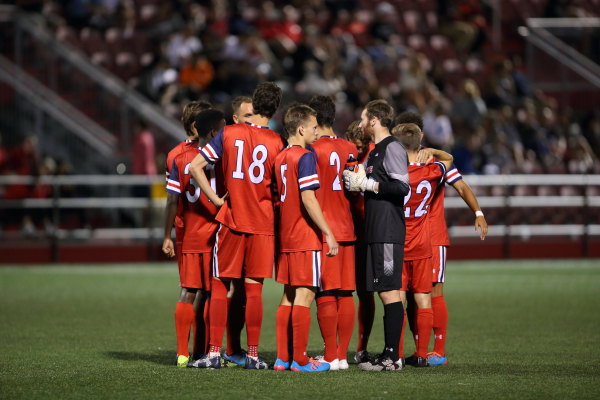 With the draw, the Johnnies’ season record went to 3-1-2. They still have an undefeated record against unranked opponents this season, while Marquette (3-1-3) recorded their third straight tie at Valley Fields Saturday night.

Despite the Golden Eagles outshooting St. John’s 18-14 on the night, the Johnnies held the edge in both corner kicks, 8-4, and shots on goal, 7-4. In 79 minutes of playing time, junior Harry Cooksley led the team with six chances, adding onto his top-10 nationally ranked shots per game average.

In the final 45 minutes of regulation, the Red Storm outshot Marquette 10-6, rebutting the Golden Eagles’ 6-1 shot advantage from the first half.

St. John’s first chance to take the lead came in the 56th minute, when Cooksley played a corner into the box that ricocheted around several times before being cleared by a Marquette defender.

Three minutes later, Cooksley had a free kick from just outside the 18 that was stopped by Marquette goalkeeper Luis Barraza. Barraza made three saves over the final 14 minutes of regulation to keep the game scoreless.

In the first overtime period, sophomore Mike Prosuk had a shot that was tipped by a defender, forcing it to sail just over the top of the goal. On the corner kick that followed, Cooksley found graduate student Simon Tchoukriel in the box, but his try narrowly missed wide of the post.

In the ensuing overtime period, Marquette outshot St. John’s 4-1, but the defensive unit was able to preserve the tie. Sophomore goalkeeper Andrew Withers, who recorded his second consecutive shutout, registered three saves on the night, including one in the opening minute of the period.