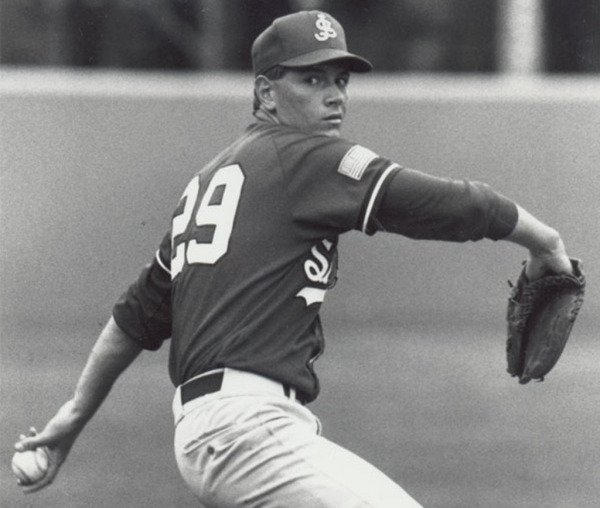 Former St. John’s baseball pitching star C.J. Nitkowski has been proudly representing his school for nearly two decades. After 17 years in professional baseball, both in the major leagues and overseas, Nitkowski has now gracefully moved on to a career in sports media.

However, before finding himself in the spotlight, Nitkowski began his journey through Queens entirely by chance.

As a lefty who struggled with his velocity out of high school, the Suffern, NY native decided to travel south to Florida Atlantic University after not receiving many collegiate offers. After one forgettable season at FAU, Nitkowski decided it was time to return to the Northeast.

Nitkowski had Big East rival, Providence, in his sights in the spring of 1992, but a trip to see the Friars play St. John’s in the Big East Tournament resulted in a change of heart.

“In the process of transferring, I was actually looking at Providence, I had some conversations with them,” Nitkowski, 43, said in a phone interview with The Torch two weeks ago. “They just happened to be playing St. John’s, and the catcher from St. John’s was a guy…who I played with at Don Bosco. He was a senior when I was a freshman. I just happened to bump into him.”

After some conversations with then-St. John’s pitching coach, Eddie Lamar, Nitkowski ended up garnering and accepting an offer from the Johnnies.

“They ended up making me an offer, and I ended up going to St. John’s instead of Providence,” he said. “St. John’s came on the strongest and offered me the best opportunity.”

That decision proved to benefit not only Nitkowski’s baseball career, but his life beyond sports. Along with meeting with his wife and learning some valuable lessons, the lefty made strides on the diamond.

Coming to St. John’s, Nitkowski was hitting up to 83-84 miles per hour with his fastball. But by the time he left Queens, his improvements caught the eyes of many major league scouts.

“When I got to St. John’s and I started working with these guys, who were pushing each other, not only during the season but also in the offseason, I started seeing my velocity start to jump up,” he said.

“In our first spring trip, we went out to California. I was told by a scout that I had hit 90 miles per hour, and that was the first time that I’ve ever heard that in my life. That was my sophomore year and by the time my junior year came around, I was topping out at 94 [miles per hour]. A lot of that had to do with the guys that I was with and how hard I was working.”

Following his time with the Red Storm, Nitkowski was selected ninth overall in the 1994 Major League Baseball Draft by the Cincinnati Reds. Despite the high expectations, Nitkowski didn’t seem to be phased.

“That did not bring on any extra pressure for me, if anything it helped me relax a little bit more. Because as a high round draft pick you’re always going to get more opportunities than the other guys.”

Nitkowski played less than a year in the minor leagues before making his big league debut in June 1995. Within months, he was shipped to the Detroit Tigers, which began his journeyman status for the rest of his career.

“A lot of guys, their first year of baseball, they’re playing A-ball somewhere, they’re pretty much staying there the whole year,” the pitcher said. “Maybe they’ll see a promotion or a change from A-ball to Double A or another A-ball affiliate over the course of their full year of baseball. For me, it was two organizations and four different cities.”

As a lefty reliever, Nitkowski was always bouncing from team-to-team throughout his 11 year MLB career. He played for nine different teams, including his hometown New York Mets and New York Yankees.

“In 2001, to get traded over to the Mets, just for that last month, it was a strange month, obviously, September 2001,” he said. “I was a member of the Mets during 9/11 and everything else, and it was interesting to say the least. Obviously I wish the situation never happened, but I was glad I was there to be a part of the organization and to be in New York at the time.”

“Three years later in 2004, I got called up, so I was 31-years-old when I got called up to the Yankees. It was so exciting to know that all those times I sat there and pretended that I was a Yankee in my backyard as a kid, then that even at 31 this was a really special moment knowing that I was going to have an opportunity to put on Yankee pinstripes.”

Nitkowski finished off his pitching career with six years overseas in Japan, Korea and the Dominican Republic. He threw his last pitch in January 2013 and began his new media career with MLB.com months later.

His interest in sports media is not new, it manifested itself throughout his playing days. He was the first player to have a website in 1990 and received encouragement from respected industry professionals, such as Peter Gammons and Keith Olbermann.

Now a few years removed from entry into the business, Nitkowski has built a reputation as a jack of all trades in baseball media. He broadcasts nationally televised games and hosts a studio show for FOX Sports 1, is an analyst for CBS Sports, hosts a radio show on MLB Network Radio and writes for FOXSports.com.

Nitkowski has also  been offered the opportunity to work with Hall of Fame caliber players like Frank Thomas and Pete Rose.

“Having guys around, especially Hall of Fame level players, it makes it fun,” he said. “I really enjoy the work.”

With both his success on the field and now in the media, Nitkowski offered up advice to both St. John’s student-athletes and students who are looking to break into the business.

“I will tell you this: Don’t be afraid to hustle. You have to do it,” Nitkowski said. “I mean obviously if you don’t have the playing career to fall back on or name recognition, you got to work your tail off.

“You have to refuse the no’s when they happen. It’s going to happen. You can’t get discouraged. If you’re serious about what you want to do, don’t be denied. Don’t let people deny you of your dream or your passion, regardless of where you are.”

Nitkowski noted how his relentless attitude comes mostly from his New York days and his time at St. John’s.

“I just continued to work at it. I’m not afraid to work. You cannot be afraid to work. You got to grind, you got to hustle. And I think that’s a New York thing. Most people in that part of the country get it. That’s a St. John’s thing. You’re not going sit back and be lazy. You’re going to get after it. You do what you got to do. I worked my tail off and I enjoy doing it.”

Even though Nitkowski enjoys his current jobs, he would be open to taking a broadcasting position with one team if the opportunity presents itself in the future.

“You know know what’s going to be out there for you, but I love my current job and the idea of just settling in with one team at some point down the road is appealing as well.”