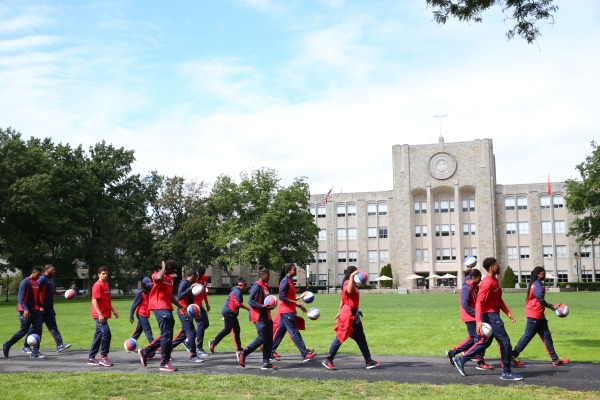 For the second straight year, St. John’s men’s and women’s basketball programs raised $100,000 for the Pediatric Cancer Research Foundation by hosting the sixth annual Dribble for the Cure fundraiser on Saturday morning.

Dr. Mitchell Cairo’s research has been greatly impacted by the success of this event. His work has helped raise survival rates in some childhood cancers from 20 percent to more than 60 percent.

“It’s all because of the money that we raised for Dribble for the Cure at St. John’s.”

Between the funds that St. John’s and UCLA have earned over the years, Dribble for the Cure has raised over $1,000,000.

“From when we first started the first year, it was hard to know whether it would be a sustaining event,” Dr. Cairo said. “Really both coaches (Steve Lavin and Chris Mullin) are critical because of their personal support and interest in sustaining and growing this event.”

Both the men’s and women’s basketball programs contributed in the Dribble for the Cure as part of University Service Day. Participants in the event had the opportunity to dribble a basketball around campus with the players from the two programs.

“It’s a wonderful feeling,” junior guard Aaliyah Lewis said. “The people involved can see how special this St. John’s family is and how much everyone wants to support them. Everyone is happy to be a part of this cause.”

“Today is about getting the chance to give back to the community,” sophomore center Yankuba Sima said. “As a team it makes us closer, but it’s not all about basketball. It’s important to give back to other people.”

Before the dribbling officially began, Mullin addressed the crowd, along with the executive of the Pediatric Cancer Research Foundation, Jeri Wilson and Dr. Cairo.

The second year head coach spoke about his biggest influences and how important giving back to the community is.

“Two of my biggest influences in life, Mr. (John W.) Kaiser and Coach (Lou) Carnesecca, are here and the biggest thing I was taught on and off the court was to give back,” Mullin said during his pre-event speech.

“Off the court, that’s what St. John’s is all about: taking care of your brother. On the court, I tell my guys that and I was taught by Coach Carnesecca that a good player can do for himself but a great player does for other people. And that’s what we’re all here to do today.”

Both teams will on the floor for the first time on October 14 for Red Storm Tip-Off. Mullin’s unit opens the season on November 11 against Bethune Cookman at Carnesecca Arena. Joe Tartamella’s team will begin the 2016-17 on the road against William & Mary on November 13.