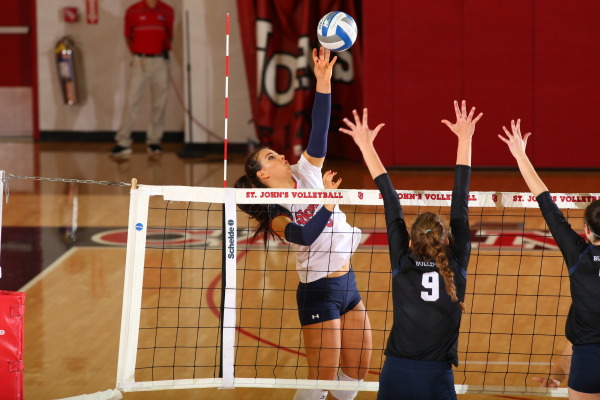 Friday night’s game against the Musketeers was the Johnnies’ first match at Carnesecca Arena in nearly three weeks. They went 4-4 over their past eight matches, which included trips to the San Francisco Challenge and the West Point Invitational.

“We were up and down a bit,” head coach Joanne Persico said. “We needed to keep intensity throughout the match. But, we’re still growing.”

Going into the match, St. John’s ranked in the top 15 in the country in blocks per set, averaging 2.92. On Friday, the team registered a season-high 17.5 blocks while also forcing Xavier (7-7, 1-0 Big East) to 32 errors and a .150 attacking percentage. However, the Red Storm were not able to get a rhythm going offensively, finishing with a season-low attacking percentage of .102.

Lexie Lobdell and Amanda Sanabia each posted nine digs, along with eight from Delaney D’Amore and a near double-double from Margherita Bianchin with nine kills and eight digs.

After the Johnnies began the first set on a 12-4 run, Xavier responded on a 16-6 run of their own to take a 20-18 lead, taking the set 25-22. The Musketeers took the second set 25-16 without any trouble, but the Johnnies avoided losing in straight sets with a 25-22 advantage in the third.

A comeback effort in the fourth set fell short for the Johnnies, who fell 25-23. Xavier senior Abbey Bessler recorded five of her match-high 19 digs in the final set, along with 10 kills en route to a double-double.

For the 12th time this season, the Red Storm recorded double-digit blocks, amassing 14.5 over the course of the match. The Johnnies also forced Butler into 24 errors and tallied 62 digs. However, St. John’s managed only a .191 hitting percentage, compared to Butler’s .229.

Upon winning the first set 25-22 after battling through nine ties, St. John’s began the second set on a 4-0 run. Butler (12-6, 1-1 Big East) eventually regrouped and took a 13-12 lead. The Johnnies went back and forth with the Bulldogs, who scored the final three points of the set after taking a timeout down 23-22 to even the match.

Butler won the third set 25-21, leading to a dramatic final set that saw St. John’s tie it at 24 before Butler scored the final two points to win the match 3-1.

Despite the loss, Coach Presico praised her team for fighting back and coming close to forcing a fifth set.

“I like the way we fight, we’re fighting and fighting,” she said. “They’re close matches, they can go either way, but we want to be in control. We want to be in the driver’s seat more.”