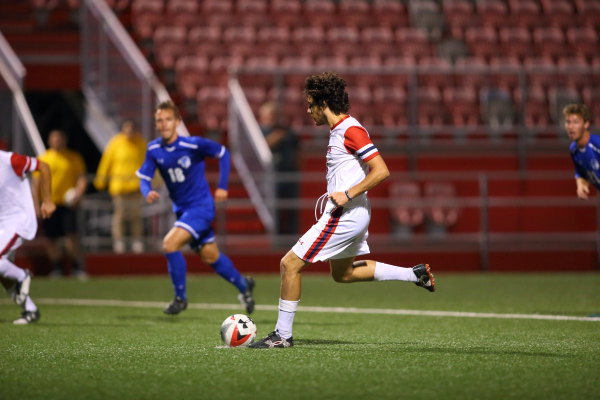 A season of surprises continues for the St. John’s University men’s soccer team.

Less than a month after losing a tight game to now third-ranked Syracuse, the Red Storm used a late-game equalizer to earn a 1-1 draw against tenth-ranked Creighton. It was just the fourth non-win for Creighton this season.

The draw also came with a bit of history. Filippo Ricupati’s equalizer in the 77th minute gave him six goals on the season in just over a month. That is the highest figure for a Red Storm player since 2008. That team made the College Cup semifinals.

Red Storm head coach Dr. Dave Masur had tempered confidence in his team after the game.

“Our objective was to win and I thought we created a lot of chances where we possibly could have won,” he said. “I’m proud of the guys’ efforts. We’re a fairly young team and a new team trying to learn how to operate and play together and we played against a very good team and I thought we really fared well.”

A combination of the Blue Jays defense and stiff winds delayed that trivia piece for the first 45 minutes. Creighton outshot St. John’s 12-1 and held the ball for lengthy amount of time. The only Red Storm shot of the half came in the third minute on an Alistair Johnston header corralled by Creighton goalkeeper Alex Kapp.

Creighton could not find the back of the net despite clearly dominating possession and creating plenty of chances. The back line was solid as always, blocking most of the chances headed towards goal. Redshirt sophomore goalkeeper Andrew Withers also made a pair of saves, including a diving stop off a corner kick in the 39th minute to preserve the clean sheet.

The Blue Jays got even early in the second half. Ricky Lopez-Espin capitalized on a rebound off of a Red Storm defender to give Creighton a 1-0 advantage in the 57th minute. It was his third goal of the season.

Harry Cooksley nearly brought the game even in the 63rd minute. His rising shot from outside the 18-yard box was met with a leaping, one-handed save my Kapp to preserve his team’s advantage.

Cooksley, however, would have his revenge, using a great touch and deft speed to create separation on the offensive left side of the 18-yard box. He put a great cross into the center of the box and Filippo Ricupati flicked it onward into the back of the net to draw the two sides even.

It was the junior’s sixth assist in 2016, and his fourth to Ricupati. Dr. Masur took note of the duo’s chemistry after the game.

Lopez-Espin nearly put a game-winner home in the 79th minute, but his header hit the post. St. John’s earned four more corners than Creighton in the two overtime periods, but both teams came up empty.

The Red Storm return to the pitch on Saturday against Xavier in Cincinnati.