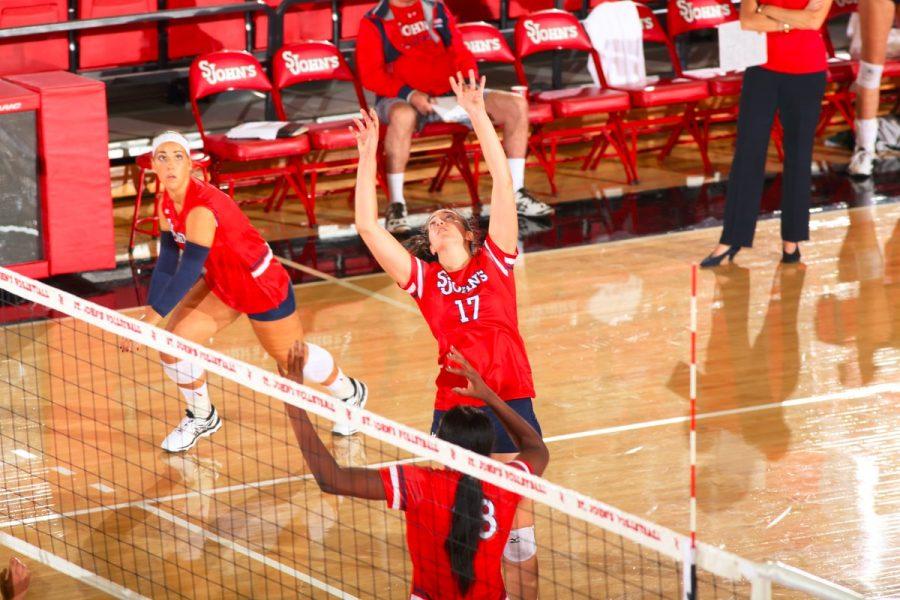 It only took Erica Di Maulo 48 hours to make her final decision, one that she had never imagined she would have to make. The thought of leaving years of memories and success 4,000 miles in the rearview was a peculiar idea to her, yet it was one she hasn’t regretted.

Leaving her home in Milan, Italy to go to New York sounded exciting and was an opportunity she is happy she took advantage of. But when Joanne Persico approached her following the Italian Championship Finals and introduced herself as St. John’s head volleyball coach, she went blank, recalling her reaction with a laugh.

Atop the red and white bleachers in Carnesecca Arena, the 19-year-old freshman takes a brief look at the court, lights reflecting off the “SJU” logo centered near the spot where she’s made her mark both domestically and internationally as a setter.

Before she even played her first match at St. John’s, Persico heaped praise on her volleyball IQ, experience, physicality and setting skills. Yet having barely lived in New York for a month, Di Maulo has had to adjust from playing as a champion and captain of club team Progetto Volley Orago in Italy to a new style of play stateside, as well as to life in a big city.

But she refuses to call it a culture shock.

“New York City is a really good experience,” she says with a smile. “I’m happy with my choice, with my opportunity…It all seems like a movie.”

Her selflessness derives from her transition from volleyball in Italy to how it’s played in the Big East. She wasn’t used to assists and digs recorded back home. She was happy, but curious when she was honored as Big East Freshman of the Week in early September after winning Most Valuable Player at the Jack Kaiser Volleyball Classic, saying to herself, “What is this award?”

“Here in America, the player is good if they have great stats,” she says. “In Italy, they don’t look at the stats. But I was really proud of myself.”

Di Maulo describes herself as wanting to do what’s best for the team, evaluating her role with the Red Storm as one she feels confident in. So when she found her team in need of a confidence boost, she didn’t hesitate to step in and encourage them to continue fighting for a shot in the Big East Tournament.

“We had a great preseason, we won seven games in a row…Then I don’t know what happened, we began to lose,” said Di Maulo. “We lost three matches in a row, and as I said to my team, I think we can do it…and if we work hard and stay concentrated on our jobs, we can still do it. I can’t predict the future, but we can do it.”

The drive she possesses now is that of which Persico saw in Di Maulo in Italy.

The Red Storm currently sit at 11-7, 2-3 in the Big East with a slew of conference games to go. Di Maulo knows she’ll play a big role down the stretch, one she says she is comfortable with. “I think I fit in pretty good,” she says. “I’m doing my best for the team.”

Leaving Italy hasn’t been the worst transition for Di Maulo.The help and support of her teammates allowing her to settle in more easily since arriving to St. John’s. “I have great teammates, really great friends,” she says. “I’m fine here.”

She credits teammates Margherita Bianchin and Gaia Traballi, both of whom are from Italy, with guiding her. “I didn’t know [Maggie] before,” she says about Bianchin, a sophomore. “But she was really helpful. I was really, really happy to see her.”

It’s almost as if she’s back home, playing volleyball for Liceo Vittoria and sharing the opportunity with her parents and friends once again. Not much has changed.

“I know the Italian guys from the basketball team and the soccer team, I have a really great relationship with them,” Di Maulo says.

“I’m really lucky. I have my little Italian family in America.”