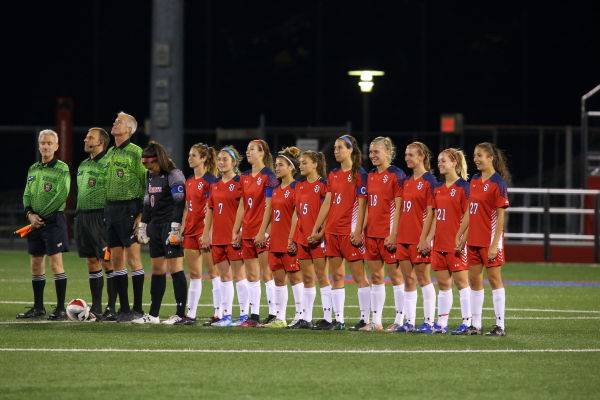 In their most recent match on Sunday, the St. John’s women’s soccer team suffered their first loss in Big East conference play, a 2-0 defeat at the hands of Marquette on the road. The Johnnies (6-2-4) were unbeaten in their last three games. This included a win and a draw in Big East action.

The first goal of the game was scored by Marquette’s Morgan Proffitt midway through the first half. Her long shot from the right side found its mark just inside the top left corner, beating Diana Poulin.

St. John’s had a scoring chance less than 10 minutes later. Samie Scaffidi re-directed a ball in the box but it was tipped away by the Eagles’ Maddy Henry.

At halftime, both the Johnnies and the Golden Eagles had five shots and both goalies had made three saves. Neither side had a corner kick opportunity.

The first corner kick went to Marquette and the ball crossed the goal line before the Johnnies’ defense could clear it, giving Marquette a 2-0 advantage.

With only a minute left in the game, Scaffidi sent another shot at the goal that was also stopped by Henry.

On Thursday, the Red Storm faced the defending Big East champs, Butler, in their second Big East match of the season. The game in Belson Stadium was played to a scoreless tie.

Neither team’s offense could break the other’s defense. St. John’s sent seven shots on target; they outshot Butler’s Bulldogs 19-14 and led the corner kick count with seven to the Bulldog’s two.

“I thought there were some situations in the game where if we had done things a little differently, maybe be a little more physical on occasion or a little more composed in the final third, then we change that tie into a win, which is what we are striving to do moving forward,” head coach Ian Stone said in a press release.

Near the end of the second half the Johnnies had their best scoring chances when Scaffidi and Allie Moar had shots on goal in the 96th minute and the 97th minute, respectively. Both of these shots were turned aside by Butler’s goalie Hannah Luedtke.

Diana Poulin made a season-best six saves for her eighth shutout of the season. The standout save of the game was in the 105th minute. Maria Collica sent a long shot towards the goal while Butler was pressuring Red Storm defense. Poulin punched the ball over the bar to keep the game scoreless.

“She was always a great shot stopper, but she’s gotten more and more confident as time has gone on…She actually misjudged the flight of the ball and lost it in the lights,” Stone said. “For her to be able to re-adjust her footwork and to make the decision to punch rather than catch it just showed that veteran experience.”

The Red Storm will host Georgetown in a Big East matchup at Belson Stadium on Thursday at 7 p.m.