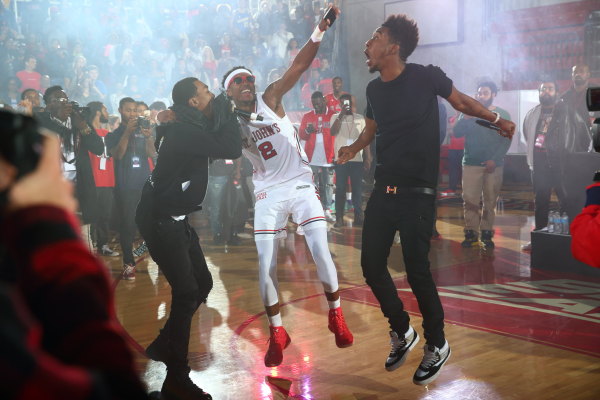 But the night didn’t end exactly as planned.

While St. John’s students, alumni and 25 plus local recruits filled the arena to its capacity to kick off the official start of the 2016-17 basketball season, the night took a chaotic turn in the middle of the headline performance by Desiigner.

Desiigner, a 19-year-old whose real name is Sidney Royel Selby III, had his set cut short by the university after only a few minutes because he was encouraging the crowd to storm the court. What followed was a frenzied scene, with students rushing in from the stands as Desiigner’s microphone was turned off.

When the lights came back on, Desiigner was ushered out of the arena by his security team, and the eventful night was over.

A St. John’s spokeswoman said there were no injuries reported.

“The University believed that the artist who performed at St. John’s Red Storm Tip Off created a potential crowd-control issue by inviting a sell-out crowd onto the court during his performance,” St. John’s said in a statement. “For that reason, the University made the decision to stop the performance to ensure that no one was injured. Our primary concern is always for the safety of our students and all who attend St. John’s sponsored events.”

The hip-hop artist did perform his two most popular songs, Timmy Turner and Panda. But in an effort to inject life into the crowd, Desiigner jumped into the RedZone section of the stands and he was pulled back onto the floor by security. Then he ripped off his shirt, leaped onto the DJ stand in front one of the baskets and encouraged everyone to come down onto the court.

“This was obviously Public Safety’s worst nightmare, people ran out of their seats and tried to climb over the rails onto the court,” St. John’s junior Obaid Zia said. “Public Safety was pretty successful in preventing the mass exodus to the floor that Desiigner probably wanted.”

“Since (me and my friend) were in the front, we got pushed all the way into the bars and basically trampled,” St. John’s student Alora Santoriello, who had VIP seats, said.

Despite the effort from Public Safety to restrain the crowd, many people jumped over the scorers’ table on the bench-side, and the lower tier was filled with people who were running down from the upper sections in order to be apart of the action.

The dozens of people who were able to make their way onto the court surrounded Desiigner on the baseline as he continued to sing on top of the DJ’s table.

“It was like a riot, people were everywhere breaking any control protocol security had in place,” Zia said. “People were standing on their seats, in the walkways, over the rails; they even turned on the lights. Desiigner kept going even when the music (and his mic) was cut…It literally felt like a riot, he was like inciting rebellion against Public Safety.”

Desiigner continued to pump up the crowd even though his microphone was turned off by moving his arms up and down rapidly. His security team escorted him through the tunnel and off the court.

Following his departure from the floor, the public address announcer quickly got the crowd’s attention by instructing sections to leave at certain times and for everyone who was standing on the court to remain in place until the stands were cleared out.

If Desiigner had any regrets about how the night ended, he wasn’t saying.

“I love St. John’s,” Desiigner told The Torch in a statement. “Thank you for turning up with me! You already know what time it is!”

For some in attendance, the craziness of Desiigner’s performance did not dim the rest of the night and their overall experience.

“It was pretty cool,” St. John’s student James Rubino said. “Desiigner was pumping everyone up and he was getting everyone excited.”

“The performance was entertaining and exciting but above all it was hectic,” St. John’s senior Ryan Spencer-Arscott said. “It was definitely worth the attendance though.”

The night kicked off with a moment of silence for the recent deaths of St. John’s students Arshell Dennis III, Tiarah Poyau and Karina Vetrano, and the social issues that have negatively impacted our country. A group of students in section four raised their fists, similar to the recent protests that were started by San Francisco 49ers quarterback Colin Kaepernick and other NFL athletes.

Second-year head coach, Chris Mullin, was also given a warm welcome from the fans as he walked onto the floor with Kanye West’s song Power blaring in the background. The crowd gave him a standing ovation and Mullin preceded by beginning a “We Are St. John’s” chant and thanking the crowd for their continued support.

While the men’s team was warming up for a shortened scrimmage, St. John’s alumnus J Cole emerged from the tunnel to the shock of everyone in attendance. J Cole greeted Mullin and the men’s basketball roster before sitting courtside to watch the white team knock off the red team, 40-34.

Malik Ellison, who was dressed in sweatpants, was the lone player who did not participate in any drills or scrimmage activities. Ellison is battling a ‘minor injury’, according to the New York Post.

Meanwhile, prior to his performance, Desiigner watched fellow Brooklyn native, Ponds, from the balcony behind the white team’s first half basket. He later was spotted on the court greeting the freshman point guard and the rest of the St. John’s team.