SJU Alum Parker finding his groove on the pitch 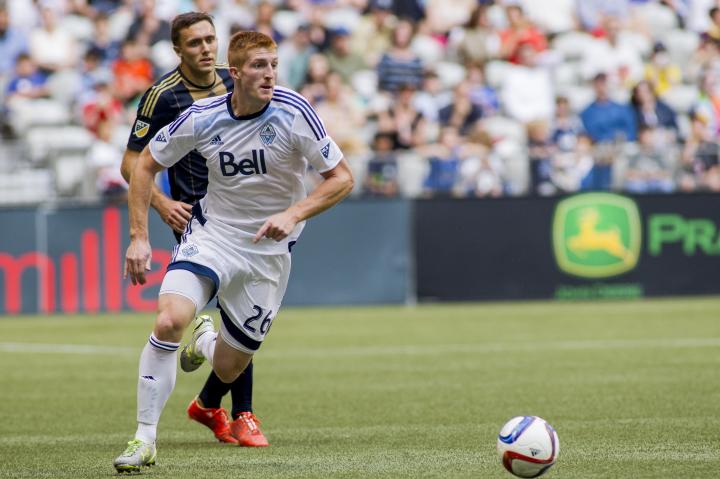 Tim Parker has found a home in the MLS with Vancouver after his St. John's career came to an end. (Photo Credit: sleterfc.com).

Ninety-nine percent of the world’s population will never understand the feeling that Tim Parker had last week.

The U.S. Men’s Soccer National Team called upon him to join the roster just three days before their friendly against New Zealand. Travel arrangements must have been a pain, but there he was Tuesday night, listening to the Star Spangled Banner draped in the signature red, white and blue uniform of Jurgen Klinsmann’s squad.

While some might come out a little gun-shy at a gigantic opportunity like this, Parker, just two years into his professional career, said he tried to go about it like every other 90 minutes of soccer that he’s played.

“It’s an honor to be called in, so you don’t want to be starstruck when you get there because it’s just another soccer game and it’s just another day of training,” he said. “All in all you just have to take it and learn from the experience and make an impact.”

Growing up in Hicksville, on Long Island, Parker probably never imagined where his love for “the beautiful game” would take him. Gatorade named him the Player of the Year in New York during his senior season at Hicksville High School, and Parker chose to continue his career close to home.

He appeared in 79 of 80 matches over his four years in Queens and helped the team win their latest Big East Tournament. His name did not show up on the stats sheet very often, but his play was recognized. He garnered All-Big East honors in his final two seasons.

“[Head Coach Dr. Dave Masur] was a defensive-minded coach, so it helped me in terms of being disciplined and being positionally correct all the time and communicating to guys around me,” he said. “Then I learned a lot of other stuff from [Associate Head Coach] Jeff Mateo and [Assistant Coach] Ben Mallue on the technical side.”

The Vancouver Whitecaps took Parker with the 13th overall pick in the 2015 MLS SuperDraft. From there, he rose quickly, eventually appearing in 15 matches in his rookie year. He says earning the honor of being drafted that high is a true honor. “It’s something that I dreamed about as a kid and it’s really good to see that I’m getting some acknowledgement,” he said.

That pick is paying off exponentially. While the Whitecaps are enduring a tough season in the MLS this year, they are steamrolling through the CONCACAF Champions League, thanks in part to Parker. He is the centerpiece of a defense that has allowed just one goal in Champions League play thus far.

The MLS is aware of Parker’s talent. Last month, they named him to the annual “24 Under 24” list, which recognizes the best players in the league under the age of 24. “It helps to know that you’re being acknowledged for some of your accomplishments,” he said. “At the same time, it gives you something to reach higher for. That’s what’s in my mind.”

He’s a mainstay for the Whitecaps, but Parker’s national team duties have been few thus far. Still, though, he said that he’s learned so much from the established players.

“Whether you’re in every camp or you get called in every once in awhile like I’ve been fortunate enough to, they make you feel comfortable,” he said. They want you to feel comfortable because then you’re able to play your game.”

“Playing your game,” as Parker said, is something that translates from college, to the MLS, to international play. “Training and playing with your national team is a different level, everything’s a little bit sharper and cleaner,” he said, “but I think you just try to do the right things.”

Parker knows there’s an end game. He realizes that there’s always something to work for, and believes that his recent call-up can serve as a glimpse of what is to come. “I would love to play in Europe and I would love to get a chance at a World Cup,” he said. “Playing for a World Cup and playing in Europe is, I think, the goal for any soccer player.”

With all the honors he has, at just 24 years old, Tim Parker could reach those goals sooner than we think.