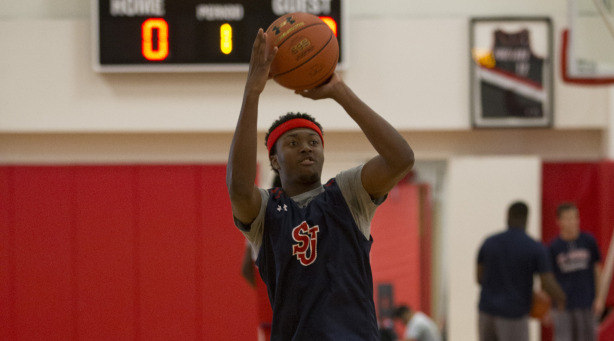 Shamorie Ponds, from Brooklyn, NY, elected to remain close to home when he committed to St. John's. (Photo Credit: Redstormsports.com)

The high expectations for St. John’s guard Shamorie Ponds heading into this season were raised even higher last week. The freshman guard out of Brooklyn was named Big East Preseason Rookie of the Year ahead of the conference’s Media Day on Tuesday, Oct. 11.

Ponds, a 6-foot-1 guard from Thomas Jefferson High School in Brooklyn, was ranked 36th overall on ESPN’s Top 100 recruiting rankings for the Class of 2016. He leads a St. John’s recruiting class that ranked in the top 25 in the nation and second in the Big East, according to 247 Sports.

The talented guard chose to stay close to home and play for St. John’s when he committed to the Red Storm in September 2015, choosing the Johnnies over Minnesota along with Big East rivals Creighton and Marquette.

That decision to stay close to home has not been lost on St. John’s players and coaches, who have continuously praised Ponds throughout his first few months on campus.

“He’s the type of kid we want,” head coach Chris Mullin said regarding Ponds. “A kid who wants to stay home, play in front of his family and friends, and play here at The World’s Most Famous Arena.”

Mullin’s praise for Ponds also extended to the freshman’s stellar play on the court throughout the team’s summer and fall practices.

“He’s smart on the court, very composed, versatile and has a quiet confidence,” Mullin said. “You put him out there and he picks things up quickly. He’s got a natural instinct for the game on both ends of the floor.”

Ponds will make his way to St. John’s after a historic senior season at Thomas Jefferson in Brooklyn. He led Jefferson to its first PSAL City championship since 1954 with a 31-point output on March 7. Just over a week later he averaged 21.5 points in two games at the New York State Federation Championships, leading the Orange Wave to another crown.

Ponds was then named to the Jordan Brand Classic in April and received an invitation to the USA Basketball Men’s U-18 National Team training camp in the summer. His preseason accolades then culminated with his Rookie of the Year selection last week.

Now with the regular season set to kick off in less than one month, Ponds will get a chance to prove himself on the court. He’ll be joined by fellow newcomers Bashir Ahmed and Richard Freudenberg, along with redshirt freshman guard Marcus Lovett, who was forced to sit out all of last season after he was ruled a partial qualifier by the NCAA.

“Marcus and Shamorie are both really talented guards with somewhat different skills,” Mullin said. “They seem to function really well together. Marcus might be a little more of a pure point guard, Shamorie more of a scorer, but he’s also a willing passer.”

Fans will get their first look at Ponds, Lovett and all of the Red Storm offseason additions when St. John’s kicks off preseason play against Baruch on Oct. 31.