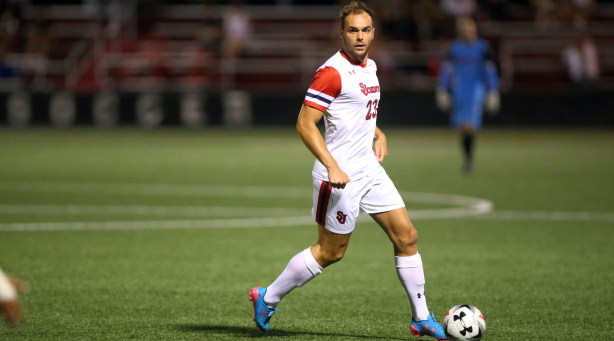 Roughly 3,437 miles separate Guildford, England, the hometown of Harry Cooksley, and the unforgiving goalposts of Belson Stadium on the Queens, NY campus of St. John’s University.

If it were up to junior midfielder he would line it up from there, as calmly and as confidently as ever, and have a go at the back of those nets without hesitation.

That’s just the type of player that Cooksley, the reigning BIG EAST Player of the Week, is. That guile was on display last week against Butler, when he cut through multiple defensemen and rifled a shot past the goalkeeper to give the Red Storm a decisive 2-1 lead in the 86th minute.

It would end up being the game-winner that helped St. John’s take down the Bulldogs, formerly the number 11 team in the nation.

“I came off for about five minutes before that,” Cooksley said via phone interview. “I think I caught a bit of a second wind and I thought, ‘I’ve got the pace to get past these guys,’ and thankfully it ended up with a goal.”

Cooksley has carried that intense confidence wherever he has gone from England, to Limestone College, where he was a third-team All-American, and eventually to St. John’s, where he is one of 16 international players on this year’s squad, but the only one from England.

As is the case in many European countries, England boasts a strong youth training program. These programs, also known as “academies,” are connected to professional clubs. Cooksley spent a number of years in Reading Football Club’s program, but understood the value of an education over the chance to play professionally.

“It’s very hard coming up through the ranks as a youngster because the older guys [on the first team] think that if you’re coming through, you’re going to take their position and this is their living” he said. “My mom was always big on education and she wanted me to get a degree. It’s such a great environment out here.”

He has taken what he’s learned in the academy system and turned it into a determination to find the back of the net. Cooksley is tied for second on the team in goals with four, and came up with the highlight of the season thus far against Syracuse on Sept. 4. He pulled to the left and slid into the ball from about 25 yards out to put a curling shot past the goalkeeper to tie the game.

Cooksley’s confidence comes from pure fearlessness. ‘There’s that quote, ‘You miss 100 percent of the shots you don’t take,” he said. “The confidence is there to get a shot on, and you never know what’s going to happen.”

Scoring is not his only game, though. Cooksley is tied for the conference lead in assists, and says he learned how to defend more once he came to the U.S..

Despite having contingencies from various countries, Cooksley said that the Red Storm’s biggest asset is its team chemistry. “I think the main thing is that everyone on the team are great friends,” he said.

No friendship may be bigger, both on and off the pitch, than the one he has with sophomore forward Filippo Ricupati. The two have connected time and time again this season, and Cooksley said that they’re equally inseparable in their down time.

“We clicked instantly, off the field as well as on the field,” he said. “We spend a lot of time together off the field and when you have a great friendship with someone, it really shows on the pitch.”

Hopefully for St. John’s, that connection can continue to lead the team to victory. The upstart Red Storm currently sit at 6-4-4 and in sixth place in the BIG EAST. Next up for them are the Villanova Wildcats, who sit two spots above them in the conference.

For Cooksley, though, this is only the beginning; his steely confidence spills over into dreams of his team’s chances. “I think we can definitely make a push for the national tournament,” he said. “We can beat anyone, it’s just whether we have the right mindset and are ready to work hard enough to get the win.”