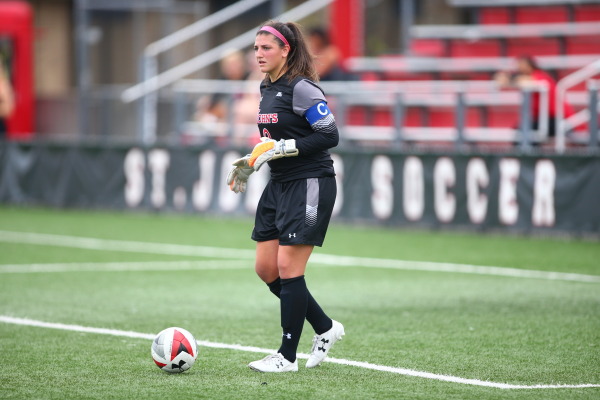 St. John’s soccer ended this past week for both the men and the women. The men ended with a 6-7-4 record overall and 2-5-2 in the Big East after losing their final game late to Providence.

Although the under-.500 record, this season showed the promise that this young team has going forward. Only four players, Simon Tchoukriel, Josh Dillon, Eric Mirkov and Filip Kula, are seniors, so most of the team will return for next season including 10 of the 11 starters from this year’s squad.

Alistair Johnston took Big East All-Freshman Team honors as he scored the third-most goals on the team with four. Johnston started off the season hot with three of his goals coming in his first four matches.

Harry Cooksley was named to the All-Big East First Team after leading the Red Storm in points with five goals and six assists. The junior who transferred from Limestone College is ranked top-50 nationally and ended in the top-five in the NCAA in shots per game with 4.47.

The Johnnies gave us a few notable and exciting wins this season including the victory over St. Joseph’s on Sept. 27 in which Filippo Ricupati scored both goals in the heated matchup at Belson Stadium and the nail-biter against Butler on Oct. 15 that was topped off by a late-game goal by Cooksley.

The women’s team lost in the Big East semifinals to Marquette after an impressive season with a final record of 11-4-5 and a 5-2-2 in-conference record.

Junior Allie Moar was named to the All-Big East Second Team and sophomore Anna Maria Baldursdottir took All-Big East First Team honors. Moar showed that she was one of the best defensive midfielders in the Big East while also taking nine shots on goal for the season. Baldursdottir led the Johnnies’ strong defense that ranked first in the conference in goals-against total and average. She marked the opponent’s’ top forwards all season.

However, goalkeeper Diana Poulin produced one of the best seasons in the goal in Big East history as she was named to the All-Big East First Team alongside Baldursdottir and received her third straight Big East Goalkeeper of the Year Award, becoming only the second player in conference history to win it three times.

Poulin set the program’s career win record and single season clean sheet record this year while ranked 12th in the country amongst goalkeepers and leading the Big East in goals-against average with a 0.47.

The Red Storm stomped Fairfield 5-1 on Sept. 4 and snapped DePaul’s seven-game win streak on Oct. 15, two outstanding wins that added to what was a successful season for St. John’s.