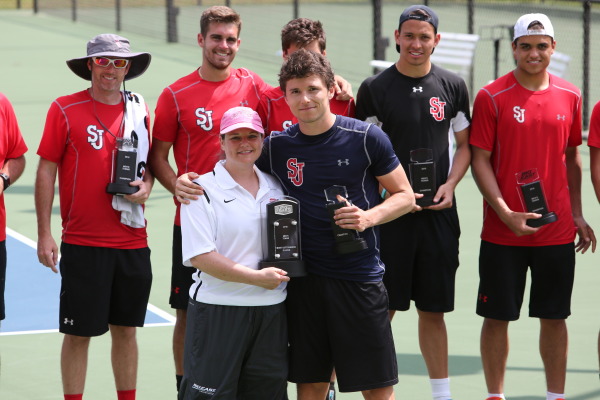 “To compete against the best players in the country, [I am] very honored…I got some great victories as well as losses…this is the only tournament where players [of this level] get to play all together,” Livi said. “To be able to contribute consistently, it shows that my hard work pays off.”

“[Roberto Livi] had a really good tournament and played some of the best tennis I have seen from him. This event gave him the chance to play against five really good players, and to come away with three wins and make it to the consolation finals is a great achievement,” Assistant coach Cory Hubbard said in a press release.

Most recently, Livi competed with four other teammates in the ITA Northeast Regionals. The team went 4-7 overall, but in doubles went 1-2 with a victory by Livi and teammate Andrei Crapcenco.

Other goals he has for his senior season is to continue to perform consistently, win the conference and lead the team to the NCAA Championship.

“Next spring I am going to try to play in more professional tournaments…” said Livi, who intends to continue his tennis career after graduation, “I will try my best to get high in the rankings.”

His sophomore year, Livi had a record of 16-4 in singles and 10-9 in doubles. He went on to win 12 straight to close out the season. He won five matches with Michael-John Every, including victory in the Big East Championship finals.

His freshman year, Livi had the most singles wins by a freshman since 2009, while also leading the team in singles wins and clinchers, with a record of 14-8. He scored a 6-0, 6-2 victory at fifth singles over DePaul’s Paul John in the Big East Championship. St. John’s claimed its third conference title and first NCAA Tournament bid.

Born in Venezuela, Livi moved to the United States when he was three-years-old. His family settled in his hometown of Port St. Lucie, Fla, where he grew up. He began playing tennis at six-years-old because of his father; who, although not professionally, played when he was younger.

Livi heard about St. John’s University from “a friend from an academy I trained at, he went here, he is graduated now, he told me about St. John’s.” He was looking for a change from Florida and found it here.

He credits the St. John’s tennis program for much of his success. “I came not playing the best…over the years I’ve been improving a lot more…my game is where it is now because of this program,” said Livi.

“Robbie’s deep run at [Oracles/ITA Masters] also showed our program can compete with the best and garnered a lot of respect from players and coaches around the country,” Hubbard said in a press release.

Besides tennis, Livi is a computer science major. He has designed an idea for a video game slated for release in the spring. “…I am investing in a video game…I hired a company to make my idea a reality,” Livi said.