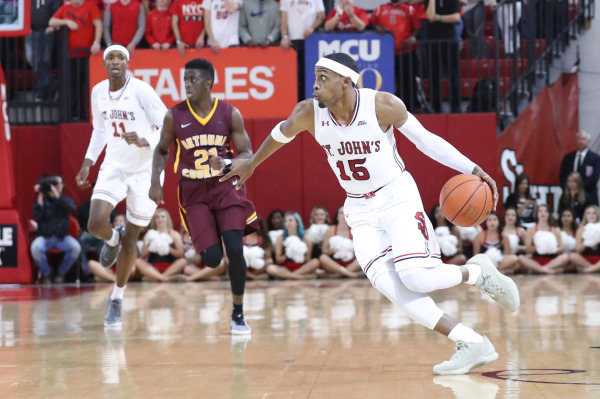 In their season opener, a rejuvenated St. John’s roster showed why things should be different for the Red Storm in year two of the Chris Mullin era.

Behind 20 points from Federico Mussini and 19 from Marcus LoVett in his Red Storm debut, the Johnnies routed Bethune-Cookman 100-53 on Nov. 11.

With four players scoring in double figures and four others scoring more than five points, St. John’s put on display an offense that is already showing vast improvements from last season. The Red Storm shot 62 percent (33-53) from the field on the night and 71 percent (23-32) during the second half.

The 100 point-output was tied for the most points in a game in the Chris Mullin era, however the Red Storm’s head coach was most impressed with how those baskets came about.

“After the game, I told them the thing I liked best was 21 assists on 33 made baskets,” Mullin said. “We shared the ball and when you play like that all your teammates can be involved which is nice.”

Leading the way in the distribution effort on offense was LoVett, who added a game-high seven assists to go with his 19 points. He had just one turnover in 24 minutes.

“It was fun playing with my brothers out there, just having fun out there,” LoVett said on his debut. “These guys are just ready to work and ready to play hard.”

The St. John’s effort on the defensive end was very encouraging as well. The Red Storm held Bethune-Cookman to just 33 percent shooting from the field (20-60) and 21 percent (5-24) from three-point range.

The turning point of the night was a 31-6 St. John’s run that stretched from the end of the first half into the first five minutes of second half.

The Red Storm finished off the first half on a 16-6 run, spearheaded by 11 points from LoVett. They then scored the first 16 points of the second half, with seven of them coming from Tariq Owens, who was also making his St. John’s debut.

Overall the Red Storm’s depth and offensive prowess was put fully on display throughout the night, and it seems like baskets should be much easier to come by in 2016-2017.

“This team definitely feels different. I really like this team,” Mussini said. “I think this team is really unselfish and we truly enjoy playing with each other.”

Marcus LoVett is the real deal- After just 40 minutes of regular season gameplay, it’s clear that LoVett will be a game changer on offense for St. John’s. The redshirt freshman looked poised running point with seven assists and just one turnover. He regularly set up his teammates with highlight reel passes and showed off a nice shot throughout the night. He shot 3-5 from three-point range and got to the rim repeatedly.

Life will be easier for Federico Mussini- After Mussini was asked to be the focal point of last year’s offense, he will certainly benefit from increased support in the backcourt this season. With help from LoVett and Shamorie Ponds (seven points), Mussini had open shots all night, and he responded by hitting five of his six three-pointers to give him 20 points in just 18 minutes.

Tariq Owens impressed on offense- Tariq Owens was a force on the defensive end for the Red Storm with five blocks, however the real highlight of his night was his offensive play. He showed some real confidence on the offensive end and even displayed a nice jump shot at one point. If Owens can provide anything at all on offense that will be just another weapon the Johnnies have at their disposal.