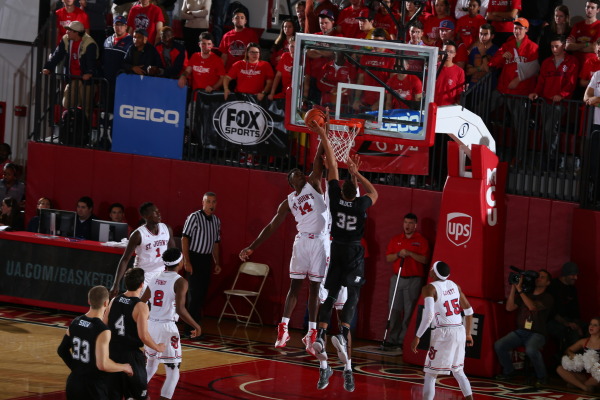 Kassoum Yakwe is slated to have a breakout season on the defensive end for St. John's (Photo Credit: RedStormSports.com).

They believe last year was nothing to worry about, a year where some of the team’s youngest players were forced to step into pivotal, sometimes unexpected roles. A hall-of-fame head coach, a revamped roster and a record that didn’t reflect what they had hoped for.

They slowly crept in, their elevated frames alternating views with one another as they strolled to their respective seats. Chris Mullin was still speaking to the media, with players concentrating just as intently as tape recorders and cameras yearning for the slightest hint about the season lurking nearby.

And even then, as waves of noise began to form around the year’s newest guards and playmakers, big man Kassoum Yakwe sat quietly, enclosed by a scrum of teammates and reporters, lifting his head to uncover the veil left behind by his blue and red St. John’s hoodie. The humble and endearing personality Mullin attributed to him spoke before he even opened his mouth.

Last year’s Big East leader in blocked shots leaped onto the spotlight, finishing 16th in Division I basketball in the same category. A Big East All-Freshman Team Selection, Yakwe’s journey from a four-star recruit at Our Savior New American School in Centereach, NY, to a defensive anchor at St. John’s comes with a new territory. This offseason, people wondered how he would improve his repertoire.

Yawke has done that and more, working on everything in hopes of a breakout season.

Noticeably bigger and stronger, Yakwe believes that more power and muscle will benefit him as the season progresses, especially when working the paint. “Over the summer, I gained about 15 pounds,” said Yakwe. “And that’s going to help me a lot when defending different guys.”

According to Mullin, Yakwe has improved on aspects aside from basketball itself, pointing to several adjustments he has witnessed during practice this year.

“He’s worked really hard. First and foremost, he’s working on his body, getting stronger,” Mullin said following his Q&A session. “We’ve really tried to give him the confidence to step out and take the shot that’s right for him. First we tried to fix his shot a little bit, give him some technical work on his shot.

“He wants to improve his weaknesses. He’s an elite athlete, he had a nice year and he wants to be a better basketball player, and he’s working on it.”

That confidence, however, did not come to Yakwe right away. Adjusting from high school to the collegiate style of play, getting comfortable was something that was developed over the course of several games, not as soon as he stepped on the floor Dec. 2 against Fordham.

When the question came up, he didn’t hesitate.

“Yeah, it took me a while,” he says. “I didn’t have a lot of confidence in myself, but as I kept playing, and then as I kept listening to my coaches, it really helped my confidence. Really by listening to them.”

Second-year assistant coach Mitch Richmond, a former teammate of Mullin’s with the Golden State Warriors, has taken the time to improve numerous facets of Yakwe’s shot. This time has played off for the sophomore from Bamako, Mali, who has already seen an improvement from season’s end in March to this past summer, all the way to October.

“I’ve been working a lot with Coach Richmond, and I’ve been shooting a lot of jump shots,” Yakwe said. “I think my free throws have improved and I know my jump shot has improved a lot, too.”

But individual talent is not all Yakwe is eager to display. The addition of new teammates, including highly-touted guards Marcus LoVett, who missed all of last season due to NCAA regulations, and Brooklyn native Shamorie Ponds, along with junior college transfer Bashir Ahmed, has Yakwe excited to uncover what the future of the program holds.

“I think we’re getting better each practice,” he said. “We’ve been here since the summer, working as a group. I think [our new players] are going to help out a lot because we have different types of talents. Richard [Freudenberg], Marcus LoVett and Tariq [Owens], they’re great guys, and them playing this year is going to help us a lot.”

As the grind of the Big East schedule introduces itself four days after Christmas, Yakwe believes this year’s Red Storm roster has the ability to overcome many of the challenges it confronted last season. On Dec. 29, that experiment will begin with a home battle against Butler.

His expectations venture more towards team building and working collectively, not individual accolades and statistics.

“The expectation is to keep working as a group,” he says. “Keep getting better, win more games. That’s the expectation.”

When asked what he wants to do differently in his second year of coaching, Mullin leans back in his chair and takes a second. He hesitates, raises his arms, and with a laugh, says, “Smile more, I guess.”

The anticipation and excitement in his voice resonates throughout the arena, the one built by his longtime consultant and former head coach, Lou Carnesecca. Last season, he says, driving home wasn’t fun. He believes this year could be different.

“We’re in a unique situation where really each guy is a newcomer,” Mullin says during his press conference. “Last year, and myself included, we kind of went through the process for the first time. Really this offseason is the first time we got together as a team.”

The thing that’s turned Mullin into a better coach is very simple, an answer he gives with two words that fail to mince his feelings.

“My players know Coach Carnesecca, he’s my mentor…When I introduce my players to coach, there’s a player, he’s 6’9”, he’s got long arms, and coach will say, ‘Can he put it in the basket?’”

Just over an hour after reflecting upon Carnesecca’s statements, Mullin’s team took the court for practice. No. 14 in St. John’s red walked onto the court. Standing in the corner with the rest of his teammates, one-on-one drills commenced. There he was, Yakwe defending other positions showing the small gathering of reporters why he was one of the country’s top young defenders.

Next time down, he dribbles towards the basket, head down and shoulders square. He finishes a tough layup with his right hand, his off-hand, bouncing off contact in the process. Last season, he wouldn’t have followed all the way through.

When the play finishes, he calmly walks back to the corner. He’s a newcomer, like all of his teammates.

But this newcomer has nothing to fear. Confidence is already at his side.