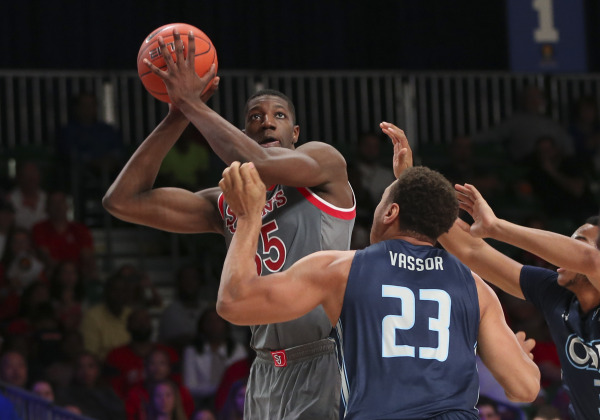 Mussini and Sima have experienced being both teammates and rivals. Outside of St. John’s basketball, each represented their home country in the U20 FIBA European Championships. Mussini represented Italy and Sima represented Spain.

“It was great, it is always good…to represent my country, see my friends – it has been a long time – I don’t see them. Also to play against Yankuba was really fun,” Mussini said.

In the Championships, Spain won gold and Italy placed fifth after falling to Turkey in the quarterfinals.

“It was an amazing experience. It was really helpful for me because after being here last year to go and play with my international team and win the gold it really brought my confidence back and was a really nice experience for me,” Sima said.

Overall, Mussini was the free throw leader for the championships and Sima tied for third in blocks with two other players, one from Germany and one from Turkey.

“We didn’t directly play against each other in the tournament, but we played a couple of friendly games before the tournament. It was really fun,” Sima said.

Both players agreed that playing in the tournament was a good way to stay in shape over the summer. Mussini said, “…During the summer you don’t get to play real games so it was pretty useful.”

Both were also in agreement that there are no major differences between European and American basketball games.

“I mean playing with the national team was always a little bit different,” Mussini said. “But I don’t really see any big differences…just having fun in both of them.”

“No, not really. At the end of the day it is all basketball,” Sima said. “The game is kind of different in the type of play but it is not that big of a difference.” He did, however, name a few of the minor differences in styles of play, “Here they are more physical…every player-they jump higher, are tougher, but no, there is not a big difference.”

Mussini and Sima do have another connection besides playing in this tournament; they have been roommates since the beginning of freshman year.

“Being both in the national teams, we played against each other a couple of times…I didn’t know him personally, but I knew who he was. We lived in the same dorm too so I had someone that I knew when I first came here,” Mussini said.

“We were literally 24/7 together, we went to class together,” said Sima. “It was weird because we were playing on the same team but it was so much fun.”

They are continuing the trend by sharing an apartment off campus this year.

“Living all day with him we got really close with each other and even this year we are living together so it is really good – a really good relationship and [he is] one of my best friends,” Mussini said.

Sima shared the sentiment, including that the friendship lent them an advantage on the court.

“…It really gives us more confidence, it brings us so much closer and there is more communication and better chemistry.”

Last season Mussini he held the team high for minutes played, at 29.3 per game, and in 3-pointers where he had 56. Along with this, he lead the Big East and ranked 31 in the nation for his 86.2 percent free throw shooting mark.

Sima, in his freshman season, had the team high for rebounds, with 5.7 per game, and had the team best with a 48.7 field-goal percentage. He ranked second in the Big East with 60 blocks and had the 15th highest shooting mark.