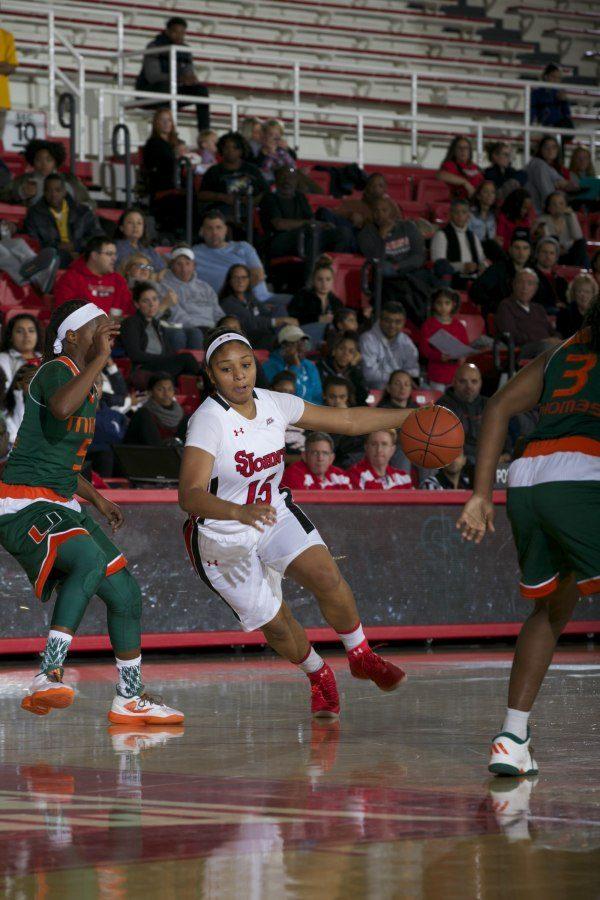 Andrayah Adams, Alisha Kebbe and Shamachya Duncan are three of the new faces for the St. John’s women’s basketball team. All three are incoming freshman that had impressive high school careers and are looking to make an impact this season. The Red Storm hope they can fill the big shoes of now graduated players, Danaejah Grant and Aliyyah Handford.

“You adjust (your lineups) to the personnel you have,” head coach Joe Tartamella said at SJU’s Media Day in October. “The cornerstones of our program, things that we have done over the years and how we have played haven’t changed, only the faces.”

Adams was a three star recruit who hails from Minneapolis, Minn. and had a standout high school career at Como Park High School. She was not sure if she wanted to go away for school, but St. John’s made her feel comfortable. “It was a good family feel. I loved being able to come up here and be embraced,” Adams said.

Adams was a six-year varsity player and was one of the top scoring guards in the country. She scored 3,000 points in high school and was named second-team all state by the Associated Press. She was twice named St. Paul’s City Conference’s Player of the year. ESPN Hoopgurlz ranked her 30th nationally at her position.

Adams is looking to continue her success in college. “Really just focusing on my defensive aspect of my game. Offense has always been natural to me,” she said.

Adams is a talented shooter who likes to shoot from the outside.

“She is one of the best shooters in a long time,” Tartamella said. She adds the ability to spread the floor to the team.

The biggest challenge for Adams adjusting to college ball so far has been the pace of the game. She said, “Getting used to the speed of the game and conditioning my body for being able to play for that long.”

Kebbe went to one of the top high school basketball programs at Neumann-Goretti in Philadelphia, PA. Like Adams, Kebbe felt comfortable at St. John’s right away. “I really liked the coaching staff. They are all really welcoming and I already knew some players on the team. I liked the team chemistry and I really felt like I fit in,” Kebbe said.

Kebbe helped her team to an overall 60-1 record and two AA state championships her junior and senior year of high school. She was named the Scholastic Play by Play MVP, the Southeastern PA Player of the Year and to the All-League First Team. ESPN Hoopgurlz ranked her 22nd at her position.

Tartamella is excited about Kebbe and believes she can end up becoming a great player.

And Kebbe is ready to prove herself at the college level.

She says her goal is “to be an impact player on and off the court.” “I think we have a really good team this year and we have a lot of people who contribute, so I think we will go really far in this season,” she said.

Duncan is a Staten Island native who went to The Patrick School. St. John’s was an easy choice for her. “It’s close to home and me and my sister wanted to go to school together. She’s coming here next year,” Duncan said.

Duncan was a three-year varsity player. She helped lead her high school to a 20-8 record and a first place finish in the UCC-Watchung Division her senior year. She averaged 8.9 points and 1.6 rebounds a game.

She is excited to bring her game to the college level. “I think what I did really good in high school was shoot, so I played defense. I will continue to play defense and shoot,” Duncan said.

The time has been the biggest adjustment for her. “We have more time in high school than in college, but I kind of like it more.”

For Duncan, her goal for this season is all about the team. “Definitely a repeat of last year,” Duncan said.

However, the success of last year does add pressure to Duncan and the team. “Everybody is expecting us to perform the way they did last year,” she said.

Tartamella is excited about the newcomers.

“They have been competing everyday which has been good for us,” he said.