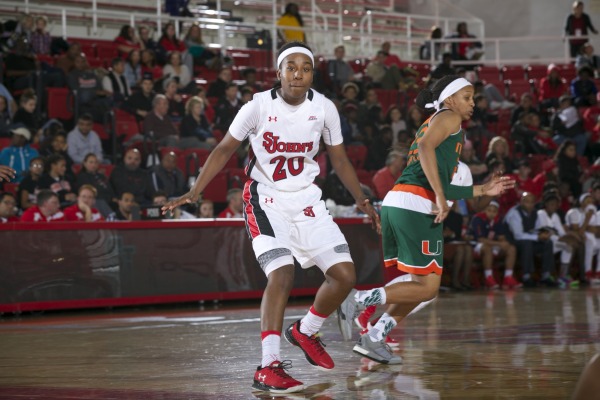 For better or for worse, it was going to be a very telling trip to Vegas for the St. John’s women’s basketball team last weekend.

The Red Storm (2-3) came into the South Point Thanksgiving Shootout in Las Vegas, Nev. as losers of two straight, and they would face two imposing matchups over the weekend against Virginia and nationally-ranked Arizona State.

However the St. John’s women were able to hold their own in their pair of games, first knocking off Virginia to hand the Cavaliers their first loss of the season before losing a tough game to 23rd-ranked Arizona State.

St. John’s kicked off its weekend in the Silver State with an impressive 11-point victory over previously unbeaten Virginia behind a game-high 20 points from sophomore Akina Wellere.

The 5-11 forward from Chicago, Ill. was in the holiday spirit the day after Thanksgiving as she feasted on the Virginia defense throughout the afternoon. She shot 7-9 from the field, including 4-6 from three-point range as she led the Red Storm offense to an impressive victory.

Also notable for St. John’s on the afternoon was Aaliyah Lewis. As expected, Lewis was the focal point of the Red Storm offense, setting her teammates up with a season-high nine assists. Although she shot just 2-9 from the field, the senior guard added 14 points after she hit nine of her 12 free throws.

Following their impressive victory on Friday, St. John’s was unable to keep the good times rolling as their upset attempt was thwarted by 23rd-ranked Arizona State.

The Red Storm were able to keep pace with the Sun Devils through the first quarter, trailing just 14-12, however Arizona State began to impose their will with a 16-7 second quarter that gave them an 11-point lead going into the half. St. John’s was unable to cut the lead within single-digits in the final frame as they suffered the 13-point loss.

Lewis led the way for St. John’s with 12 points, while freshman Alisha Kebbe added 11 points and grabbed six rebounds, both career-highs. Wellere, who led the Red Storm in scoring over the past two games, did not play due to an ankle injury.

“I thought we had a pretty good first half,” Head Coach Joe Tartamella said. “Their pressure really bothered us and they took us out of a lot of the things that we were trying to do throughout the game, but I thought we held our own.”

Tartamella has to be happy with his team’s performance in Vegas. After back-to-back home losses in the week leading up to the South Point Shootout, the Red Storm showed this weekend that they are able to hold their own against Power Five opponents on a neutral court.

This weekend also continued the emergence of Akina Wellere on the young season. The sophomore is now averaging a team-high 13.3 points per game through her first four games this season, and she is shooting an impressive 48 percent from the field and 52 percent from downtown.

St. John’s continues their tough non-conference slate with matchups against Albany and Lafayette at home this week.