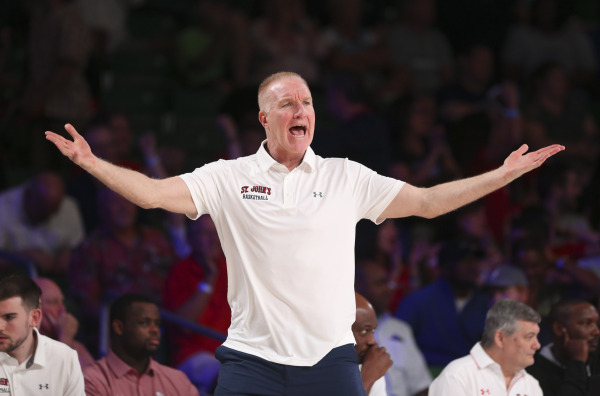 After a 2-1 start to the 2016-2017 regular season, the St. John’s Red Storm men’s basketball team took a step up in competition as they made their way to the Bahamas for the Battle 4 Atlantis tournament.

As one of the premiere preseason tournaments in college basketball, the Battle 4 Atlantis consisted of three top-25 teams, two of the best mid-major programs in the nation, another major conference program in LSU and a feisty Old Dominion team. Despite a talented young backcourt duo and a team that features plenty of improvements from last year, the Johnnies had their work cut out for them this past week.

While the overall performance was a solid experience and is promising for the future, the Johnnies went 0-3 and finished in last place in the eight-team field.

St. John’s tipped-off the tournament with their toughest task of this young season: A tussle with the 24-ranked Michigan State Spartans.

The Red Storm jumped out to a quick 17-9 lead thanks to an early burst of energy from Bashir Ahmed and Marcus LoVett. But the Spartans went into the break with a three-point lead and veteran-laden talent on their side for the final 20 minutes.

Despite missing their top two big men, the Spartans demolished the Johnnies in the paint in the second half. They out-rebounded Chris Mullin’s team by 10, held Yankuba Sima and Kassoum Yakwe in check (scored a combined seven total points) and pounded the ball inside with their freshman center Nick Ward.

Overall, the Spartans beat the Johnnies on the glass by 21 and received a combined 31 points from Ward and Miles Bridges.

The Johnnies couldn’t muster enough offense to keep up with Sparty, falling 73-62.

“For the whole game it was our offense,” Mullin said when asked about the difference in the game. “I thought our defense was pretty solid. We got killed on the boards, but statistically when you shoot 30 percent, there are a lot of defensive boards. They had 14 offensive rebounds, which is probably more key for us. When you miss shots it’s deflating.”

Also, Bahamas native Lourawls ‘Tum Tum’ Nairn Jr. had a monster second half. He scored 11 of his 13 points over the course of the final 20 minutes, including three three-pointers and a dunk that sent Imperial Arena into an uproar.

After the tough opening loss, the Johnnies had a quick turnaround against another quality opponent in the VCU Rams.

Once again, the Red Storm jumped out to an early lead but were unable to sustain their level of production.

LoVett (18 points) and Shamorie Ponds (10 points) were poised and aggressive against VCU’s vaunted pressure defense. However, Rams point guard Jonathan Williams was the best player on the floor for both teams.

Williams scored 22 points on 8-of-15 shooting, while also dishing out six assists, grabbing four rebounds and turning the ball over just a single time. The junior changed the momentum of the game right before the half, as he swiped the ball away from Marcus LoVett and finished a layup on the other end to cut the Johnnies’ lead down to two.

“We basically played our fifth game together,” Mullin said. “Some of that takes time. We just got to keep working at it and break through it. I thought we played well enough to win.”

The Johnnies lost the first two games of the tournament, but Michigan State and VCU are excusable loses given their national success level. However, their final loss to Old Dominion, 63-55, is viewed as a step in the wrong direction.

“We probably took a step back,” Mullin said. “To develop team chemistry and trust, it takes going through this stuff, flushing it out and working through it. As frustrating as it is that’s usually what makes a team…No one likes to lose and play terrible but usually when you look back that is what turns a team into a team.”

Showing fatigue after expending a lot of energy over the first two days of the tournament, the Johnnies were beat to 50-50 balls, were crushed on the glass (54-34) and gave up 26 offensive rebounds.

Their late rally against the Monarchs created some uneasiness, but the Johnnies dug themselves into too big of a hole early in the second half.

St. John’s still has multiple tests during their non-conference schedule, including a road game at Tulane, a trip to the Carrier Dome to play Syracuse and a home battle against Penn State. There are still plenty of chances to improve and impress before Big East play tips-off at the end of December.