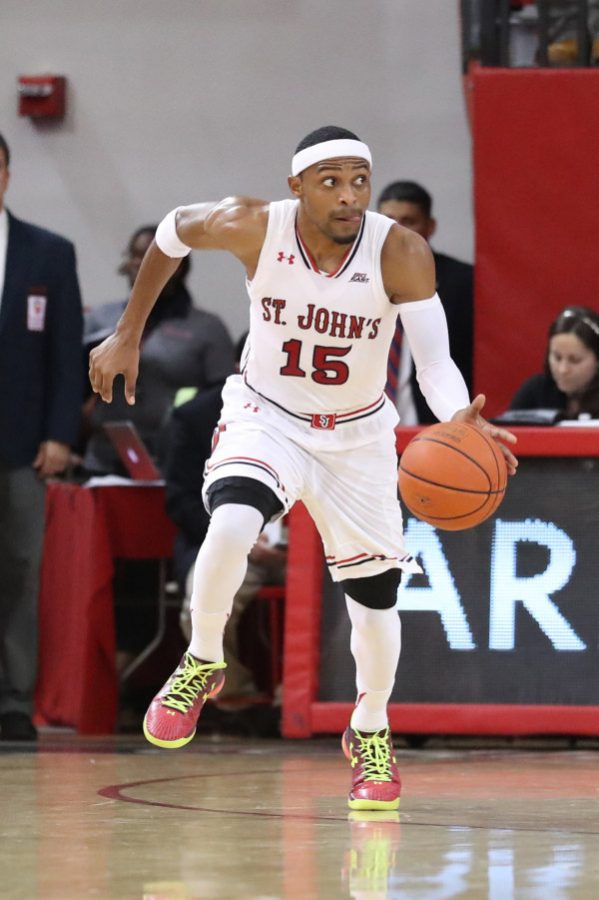 Tuesday night at Carnesecca Arena marked the first game for St. John’s after a Thanksgiving voyage to the Bahamas, where they lost three consecutive games to Michigan State, VCU, and Old Dominion. In a welcome-back game against Delaware State, the Johnnies were supposed to put the Hornets away with the ease that a 20 point favorite and a 97% chance of winning showed. One that would snap their four-game losing streak

In a matchup against a 1-5 team ranked 341 out of Kenpom.com’s 351 listed college basketball teams, the Red Storm failed to get back to their winning ways, losing to Delaware State (2-5) 79-72 in front of a large, antsy home crowd.

Delaware State’s lone win prior to Tuesday was against Division III team Summit. The Hornets led for all but 46 seconds of the game, when St. John’s (2-5) held a 21-19 advantage with just over nine minutes left in the first half.

“We were able to do what we’ve been practicing,” Walker said. “We were able to have enough discipline to pull it out at the end. The guys did well, and I’m proud of the way they played tonight. They finally put a game together.”

In their game against Montana State, Walker said the first half his team put together was one of the best he had seen in his two years as coach. The second half, however, was a different story in their eventual blowout loss. Tuesday night rewrote the memories of the game in Montana against a team looking to build upon an 8-24 record from Chris Mullin’s rookie season as coach.

Sophomore guard Federico Mussini, who tallied 11 points on the night, admitted that St. John’s looked past Delaware State following close games against Michigan State and VCU this past weekend.

“I think that was our problem,” Mussini said. “When we play big teams, everybody is high, everybody is ready from the beginning. So we’ve got to respect everybody and they played a great game.”

The score did not indicate how much the Hornets took advantage from the start. Despite St. John’s holding an individual advantage at every position, Delaware State combated the Red Storm’s use of its perimeter players with an aggressive zone defense that forced St. John’s to connect on just 12 of their 37 three-point attempts.

In the second half, St. John’s did not attempt a free throw.

“I guess we thought we had open looks,” Bashir Ahmed, who led the team in scoring with 19 points, said. “But some of the shots we took weren’t good shots. We just have to do a better job moving the ball around and just being more patient and finding the right shots.”

St. John’s finished with as many turnovers (14) as assists. In the first half, Mullin’s team failed to find a rhythm, trailing by as much as seven before narrowing the deficit to four, 38-34, at halftime.

After picking up his fourth foul at the 15:21 mark of the second half, Ahmed sat. The freshman Ponds, who led the team in rebounding with nine, took on the scoring duties, finishing with 15 for the game. LoVett followed with 13.

Lackluster defense, however, was the story of the night. The Hornets broke St. John’s full court press with ease, finding uncontested layups with no defenders in the vicinity to protect the paint. The 64% shooting for Delaware State carried over into the second half, where they shot 53%.

“Our defense was horrible,” Mullin said after the game. “One-on-one and as a team. I thought we lost trust in each other a bit. Shrinking the floor, not helping the helper, things that we’re usually pretty good at, which we work on every day.”

Down 67-54 with 7:17 remaining, Ahmed returned for the Red Storm, hitting a layup in traffic followed by a three-pointer that cut the deficit to eight. Inside-out offensive sets involving guards and big men worked in the Johnnies’ favor, giving the team favorable looks at the basket.

For the first time all game, St. John’s forced turnovers with their full court press. Delaware State committed three turnovers that led to two Red Storm layups, reenergizing a crowd that saw a margin as big as 13 narrowed to six with 3:16 remaining.

St. John’s reverted back to shooting the three with plenty of time remaining, solidifying a win for Delaware State that not many anticipated.

It was a reminder that the program has a way to go, a loss that brought back gut-wrenching thoughts of last year’s exhibition 90-58 loss to St. Thomas Aquinas, a Division II college.

“I think their confidence grew [as the game carried on],” Mullin said. “You see that in sports. It goes both ways, and a lot of times, you makes your breaks and you make your confidence. So we have to give them credit for that.”