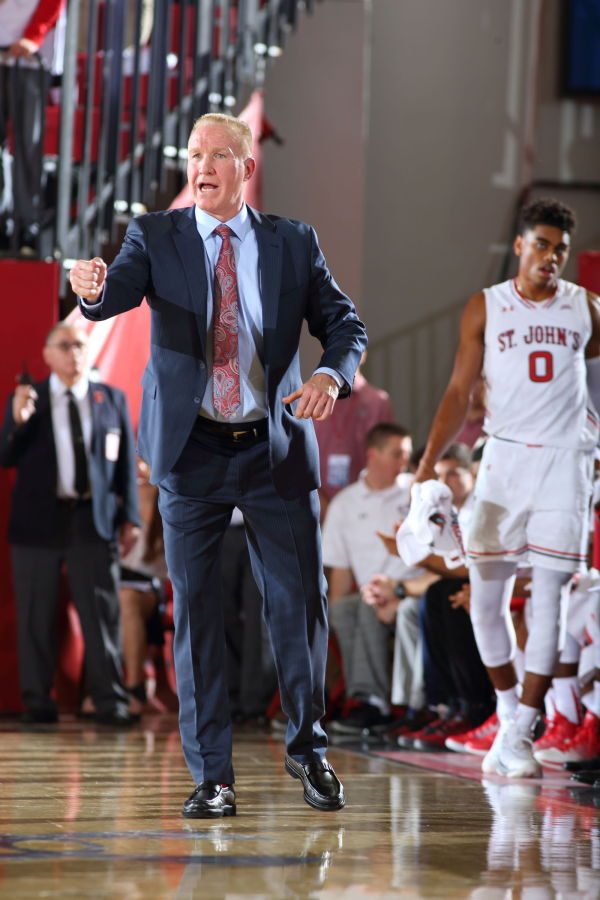 When Brooklyn-native Shamorie Ponds announced his decision to stay home and play his college ball at St. John’s, it was moments like this that he likely envisioned.

A big home game against a ranked conference rival with an entire arena behind he and his teammates, trying to will them to victory.

Well, Ponds got the first of what he and St. John’s fans hope will be many moments like that against Butler on Dec. 29. Behind a game-high 26 points from the freshman sensation, the Red Storm (7-7) came from behind to upset No. 13 Butler, 76-73, in front of a sellout crowd at Carnesecca Arena.

“It means a lot. That was a big win, especially at home,” Ponds said. “They’re a good team and in the second half we just cut down on our mistakes and got the win.”

The win marks the first ranked opponent that the Red Storm have beaten in the Chris Mullin era. It was also the first time that St. John’s has beaten a team ranked 13th or higher at Carnesecca Arena since they took down Syracuse in Feb. 1983, when a sophomore Mullin scored 19 points.

A sellout crowd of 5,602 seemed hungry to break that streak as the game remained close in its final minutes. The crowd’s impact was not lost on Mullin and his team.

“It was really nice to see the people out there. It was good our guys came through and gave them something to cheer about,” Mullin said. “I kept saying that it’s waiting to blow up, [we need to] give them something cheer about…There is nothing like that so we have to keep it going and sell this place out every night”

For much of the night, however, it appeared as though Red Storm fans were going to leave the arena without much to cheer about. The two teams went into the half tied at 38, despite St. John’s shooting nearly 58 percent from the field. Turnovers were the main issue for the Red Storm through the first 20 minutes, they committed nine of them, and many were unforced.

As the second half began, Butler surged to a five point lead within the first five minutes, and that lead eventually expanded to as many as 10 with just over 10 minutes left to play.

But led by Ponds and Bashir Ahmed, who added 19 points on 6-12 shooting, St. John’s slowly was able to chip away at the Bulldogs lead. A three-pointer rattled in by Ahmed at the 9:15 mark capped off a 7-2 run in just over a minute for the Red Storm and cut the deficit to just five.

Butler led by five, 69-64, after a Kelan Martin jumper with 2:56 left, but the Bulldogs would quickly see that lead evaporate. A Ponds three-pointer followed by a steal and breakaway dunk by Malik Ellison tied things at 69 and sent the Carnesecca Arena crowd into a frenzy with 1:34 left.

The Bulldogs took their final lead of the game after a Tyler Wideman second-chance layup gave them a two-point advantage with just over one minute left, but from there it was all St. John’s. Marcus LoVett answered that with the two most important points of his 10 on the night to tie the game, and after a Butler miss on the other end, Ellison was fouled going for a rebound and went to the line with just 14 seconds left.

The sophomore guard drained his first free throw to give the Johnnies a 72-71 advantage, and following a miss on his second attempt, Tariq Owens grabbed a huge offensive rebound to retain possession for St. John’s. Following a timeout, Butler fouled Ponds with nine seconds left, sending him to the line for the two most important free throws of his short St. John’s career.

Ponds, cool as could be, calmly stepped to the line and drained both shots in front of a hushed Carnesecca crowd to put the Red Storm ahead 74-71.

“I was just confident,” he said. “I was confident going to the foul line and saying, `I’m going to make these two free throws.'”

Following a pair of free throws from Butler’s Tyler Lewis that cut the St. John’s lead to one with six seconds left, Ponds again went to the line and drained two more to extend the lead back to three.

In the game’s closing moments, the Bulldogs’ Andrew Chrabascz missed a three-pointer that would have tied the game, but after Darien Williams missed both free throws on the other end with one second remaining, Butler had one last shot to send the game to overtime.

That last shot came in the form of a three-quarter court heave from Martin that clanked off the front rim. What followed was a long exhale from the sellout crowd, and eventually, a celebration.

“We just stayed together and fought it out. We knew Butler was a good team,” Ahmed said. “They were fighting out there. We knew they were going to come out hard, so we came out hard too.”

The win capped off an impressive two-game stretch for St. John’s after their dominating performance in the Carrier Dome against Syracuse on Dec. 21. The Red Storm will now turn their sights on DePaul as Big East play continues.

But while this win is outstanding start to conference play, the young Red Storm know that they will have their work cut out for them over the next two months if they plan on making a splash in the Big East.

“The way the BIG EAST is set up right now, it’s really back to its original form where you’re going to really have some great rivalries. Real rivalries,” Mullin said.