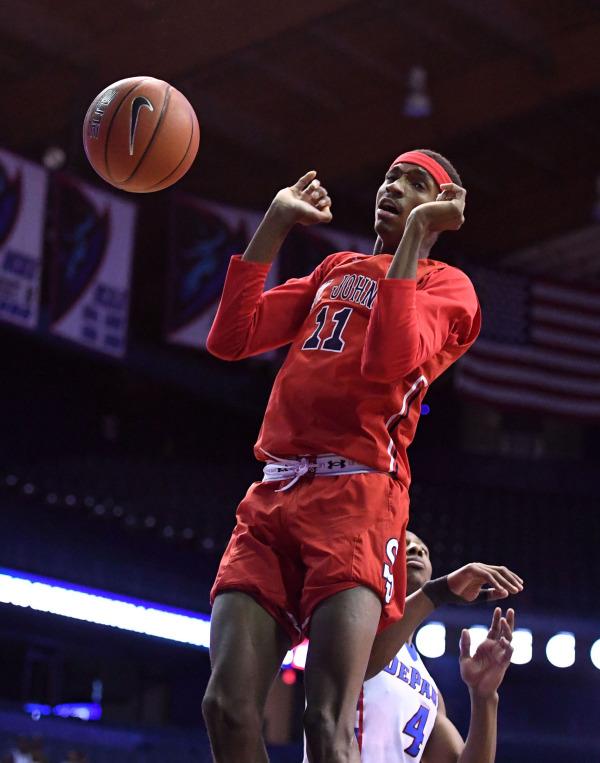 Tariq Owens was a big part of a Red Storm front court that led the Johnnies to a victory. (Photo: RedStormSports.com)

After an inconsistent start to the regular season, the St. John’s Red Storm may finally be finding their way. The Johnnies (8-7, 2-0) rang in the new year with another come-from-behind win as they topped DePaul 79-73 for their third straight victory on Jan. 1.

The win gave St. John’s its first 2-0 start to conference play since the 2010-2011 season. They now join Villanova and Xavier as the lone unbeaten teams in the Big East through two games, a situation that even the most optimistic Red Storm fans would admit they didn’t see unfolding just a few weeks earlier.

Once again for St. John’s, it was the electric backcourt duo of Marcus LoVett and Shamorie Ponds that set the tone on the offensive end. LoVett led all scorers with 22 points on 7-13 shooting from the field, and he added six assists and three rebounds in 34 minutes. Ponds shot just 2-7 from three-point range, but still scored 15 and had a game-high four steals.

“Both Marcus [LoVett] and Shamorie [Ponds] are really talented. They are a little bit different [players],” Head Coach Chris Mullin said. “Marcus has really great speed and can get to the paint. Shamorie is a little smoother with angles; but they’re both very unselfish.”

But Ponds and LoVett had plenty of help on both ends of the floor. Darien Williams and Tariq Owens were sensational for the Red Storm, much like they were in the previous two games of this brief winning streak. Williams and Owens combined for 21 points, 14 rebounds and six blocks, with Williams scoring a season-high 12 and Owens adding nine of his own.

Following their impressive wins over Syracuse and Butler in the past two weeks, St. John’s came out extremely sluggish to being the afternoon. They trailed 7-0 within the first four minutes, and fell behind by as many as 12 in the first half.

Eventually the Red Storm tied things up with 4:01 left in the first half, but DePaul closed the half on a 12-5 run and took a 40-33 lead into the intermission.

But playing from behind is not something that St. John’s has had any trouble with during their winning streak. The Red Storm kept the DePaul lead under five through the first 10 minutes of the second half, fueled mostly by Ponds, LoVett and Bashir Ahmed, who had 14 points.

In a tie game with just over six minutes left, a powerful Tariq Owens slam and the foul gave St. John’s a lead that they would not relinquish. On the following two St. John’s possessions, Williams, who shot just 58 percent from the free throw line coming into the game, drained four straight free throws to give the Red Storm their largest of seven.

St. John’s hung on to that lead for the final 5:29 of the game, and behind 13 combined points from Owens and Williams over the final six minutes, the Red Storm hung on for the 79-73 win.

“Tonight in the first half we played okay. Our defense was a little lackadaisical,” Mullin said. “The second half we came out and held them to 33 points. We had 18 assists so the ball was moving…They hung in there, played well together and more importantly, trusted each other.”

Following their third straight win, St. John’s will now face arguably their toughest task of the season when they host 10th-ranked Creighton at Carnesecca Arena on Wednesday.