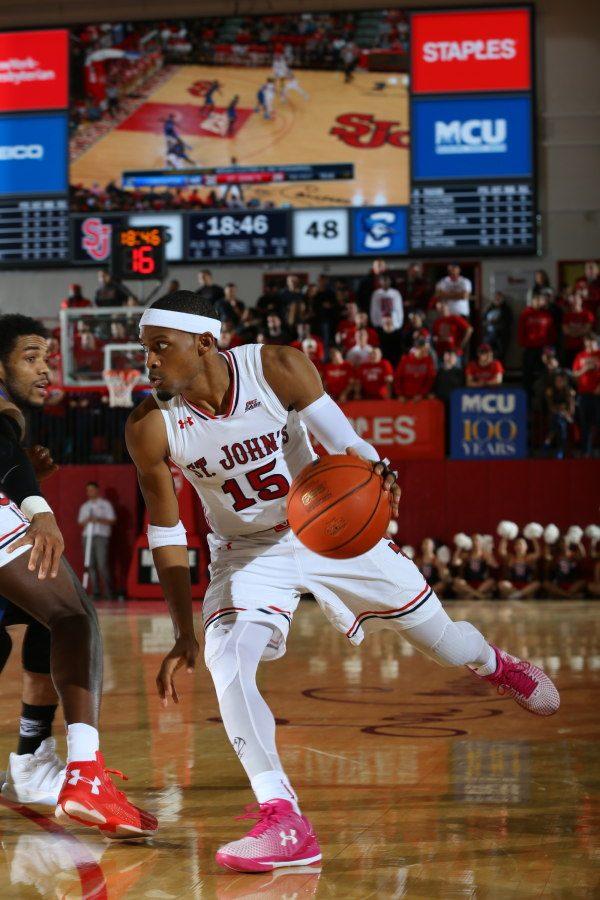 In front of a raucous Carnesecca Arena crowd hungry for another top-25 upset, the St. John’s Red Storm were unable to duplicate last week’s magic. The Johnnies were overpowered and, at times, overmatched against No. 10 Creighton as they fell 85-72 to the Blue Jays for their first Big East loss.

The Red Storm fell behind by as many as 18 in a first half that saw them shoot just 31 percent (12-38) from the floor. Couple that with Creighton’s 28 points in the paint, and St. John’s saw themselves in an 44-26 hole at the half.

“A little bit of effort and not communicating,” Shamorie Ponds said on the defensive struggles. “That’s why they were able to get those big runs on us. I felt like if we would’ve talked more, we would’ve been able to get to those certain spots that we needed to for us to contain them.”

“I thought we were a little stagnant. We were moving so slow. Coming off screens and getting into pick-and-rolls, we were just too slow and they were the opposite,” Head Coach Chris Mullin said.

St. John’s fell behind by as many as 24 in the opening moments of the second half, but once again they would fight back to make it a game. The Red Storm went on a 25-11 run stretched over nine minutes to cut the Creighton lead down to just 10 with 8:31 left to play.

From there, a multitude of missed opportunities on offense to cut the lead to single digits haunted the Red Storm. They were able to get within eight, 63-55, after a LoVett layup with 6:17 left, but a clutch three-pointer from Maurice Watson Jr. on the following possession silenced the crowd and gave Creighton a double-digit lead that they would not relinquish.

The story of the loss for St. John’s has to be their inability to defend the paint. A Red Storm team that is weak in the front court had that weakness exposed all night long by the Blue Jays. Despite the rebound margin being equal at 40, Creighton dominated St. John’s 52-26 in the paint.

Leading that charge for the Blue Jays was freshman center Justin Patton. He feasted on the St. John’s low post defense all night to the tune of 25 points on 11-14 shooting, and also added nine rebounds.

“That’s a tough task for us. He’s a big guy, has multiple moves and we didn’t have an answer for him. He’s a great player,” Ponds said on Patton.

Patton’s monster game was coupled with highlight performances from Watson, Marcus Foster and Khyri Thomas. Watson scored 19 and tied a team-high with five assists, while Foster added 15. Thomas did a little bit of everything, with 11 points, five assists and five rebounds. He also did a solid job on the defensive end keeping LoVett and the St. John’s offense from building any prolonged momentum.

“He did a good job, but I wasn’t aggressive. I felt like I should’ve been more aggressive,” LoVett said. “Give credit to their team. They had a good game plan and know how to play with each other.”

Following the loss, St. John’s will have another tall task ahead of them this weekend. The Red Storm will go on the road to face No. 16 Xavier, their third ranked opponent in their last four games.