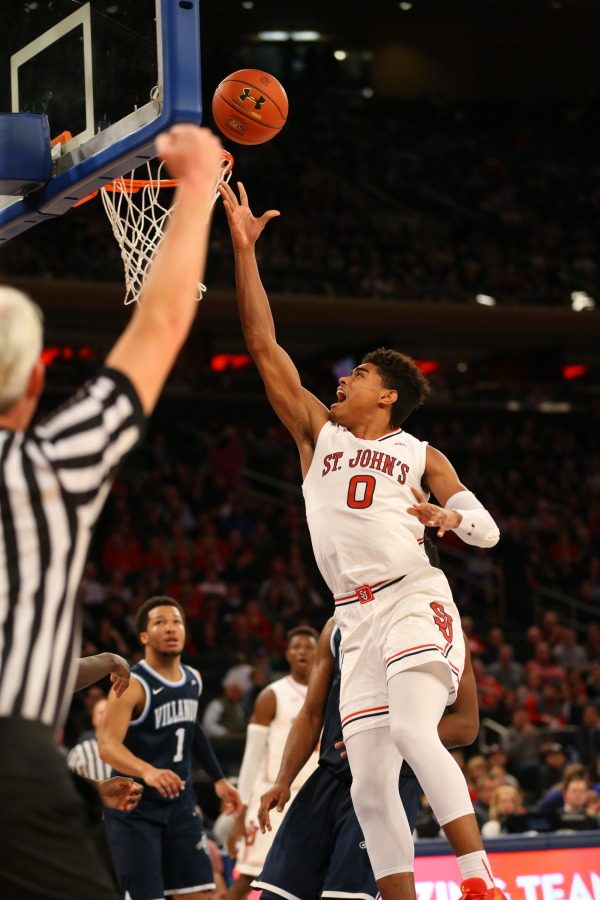 Since the start of the Chris Mullin era in Queens, St. John’s players, coaches and even fans have preached the ongoing “process” of rebuilding the Red Storm into the national power that they once were.

Well, that process missed a golden opportunity to take a major step forward on Jan. 14.

St. John’s failed to jump on a second-ranked Villanova team that had one of its worst performances of the season, and they suffered a 70-57 loss to the defending national champions at Madison Square Garden.

The Wildcats got just 21 points combined from their senior leaders, Josh Hart (11 points) and Kris Jenkins (10 points on 1-10 shooting), and they turned the ball an uncharacteristic 20 times. However a huge 19-point performance off the bench from freshman Donte DiVincenzo and dominance on the offensive glass (13 offensive rebounds), helped Villanova spurn the upset.

“[Villanova] definitely won the 50/50 battles, so it was tough for us down the stretch,” Shamorie Ponds said. “We played well in the first half, but in the second half they attacked us and we backed down.”

The Red Storm came out hot in the first half, leading by as many as six midway through the period. Eight early points from Bashir Ahmed and some help from Ponds and Marcus LoVett gave St. John’s a 22-16 lead with just over seven minutes left in the first.

But from there, the end of the half would be all Villanova. The veteran Wildcats went on a 17-4 run over the next five-plus minutes to jump out to a seven-point lead, and they took a 35-29 advantage into halftime.

“They just punched us and we couldn’t recover from the punch they gave us,” Ponds said.

Although they couldn’t recover from that punch, the young Red Storm have to receive some credit for hanging tough with the Wildcats in the second half. Aided by missed shots and sloppy turnovers from Villanova, the Red Storm were able to stay within striking distance of the defending champions.

But turnovers, questionable decisions and inefficient offense, all of which have plagued St. John’s all season, kept the Red Storm from a program-changing upset.

The Johnnies stayed within eight points for almost the entirety of the opening 10 minutes of the second half. But their own offensive woes and mental mistakes kept them from threatening the lead. Eventually the Wildcats exerted their will on the Red Storm in the final five minutes and led by double-digits down the stretch. They cruised to a 70-57 victory much to the delight of a very pro-Villanova crowd at The Garden.

Ponds led the way for St. John’s with 13 points, while LoVett added 12 and Ahmed struggled to just 11 after scoring eight points in the first five minutes of the game. Malik Ellison added 10 and kept Jenkins at bay on the defensive end.

“Malik has been doing a great job,” Mullin said. “I wouldn’t say we shut down Kris Jenkins because he went 1-for-10, but we concentrated on him and he had an off night. Malik has done a great job on some of the high scoring forwards we put him on.”

Despite the clear missed opportunity for an upset, the Red Storm have to gain some confidence knowing that they hung with arguably the best team in the country.

“Villanova is one of the best teams in the country and reigning champions, and we played with them today,” Ellison said. “The fact that we went out there and battled, and that the game was close well into the second half.”

St. John’s will now finally get a break after three of their last four games have been against ranked opponents. They will face DePaul at home on Jan. 16 as they look to snap their current four-game losing streak. The Johnnies last victory came against DePaul on Jan. 1.

“We’ve been on the road a lot, which is tough,” Ponds said. “Three of the last four games we’ve played ranked teams. We just need to get ready for DePaul on Monday.”