Up and down winter break for men’s basketball 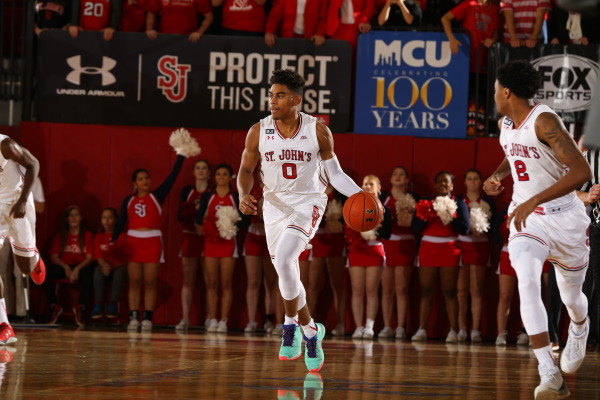 More than a year after St. John’s upset former Big East rival Syracuse in front of a full capacity crowd at Madison Square Garden, Chris Mullin’s team once again found themselves as the underdog four days before Christmas. For 40 minutes, the Red Storm dominated the Orange, playing some of their best basketball of the season en route to a 93-60 blowout win, the worst loss in program history for Syracuse at the Carrier Dome. Johnnies freshman guard Shamorie Ponds scored a game-high 21 points, while Malik Ellison and Marcus LoVett flirted with triple doubles. “We all just got together this week in practice and we made it a big emphasis to come out and play hard and play with a lot of energy,” said Mullin postgame. “And it benefited us.”

The team’s next game came in Queens against then-No.13 Butler. Ponds once again led the Red Storm in scoring with 26, with junior Bashir Ahmed adding 19. For the second consecutive game, St. John’s won in dramatic fashion. A free throw by Ellison gave them 72-71 lead with 14.1 seconds remaining. “It means a lot,” said Ponds, who hit four free throws in the final 9.1 seconds to seal the game. “That was a big win, especially at home. They’re a good team and in the second half we just cut down on our mistakes and got the win.”

Looking to win a season-high four games in a row, the Red Storm fell behind by 24 in the second half against then No. 10 Creighton in front of nearly 5,000 fans at Carnesecca Arena. The freshman backcourt of Ponds and LoVett combined for 40 points. A furious comeback effort from St. John’s cut the Bluejays lead to single digits, but was not enough as the Johnnies fell 85-72. Freshman Justin Patton scored 25 points for Creighton, while Maurice Watson Jr. added 19 points and five assists. St. John’s shot 39.4 percent from the field, while the Bluejays shot 52.3 percent.

10 days after their loss to Creighton, St. John’s hosted defending national champion Villanova at Madison Square Garden. Despite forcing 20 turnovers, a season-high for the Wildcats, the Red Storm lost the rebounding battle 41-23, only collecting three offensive boards to Villanova’s 13. “Statistically, the rebounds are what killed us,” Mullin said. “But more importantly a lot of times we played good defense and they took away opportunities for us to get a little free flow in the open court.” The Wildcats had four players finish in double figures, leading by as much as 17 with three minutes left in the second half. St. John’s soon cut the deficit to 10 late, eventually falling 70-57.

Jan. 16 marked a career day for Malik Ellison. The sophomore from Voorhees, N.J. connected on seven of his 10 shots from the field, including five three-pointers, to finish with a career-high 23 points in a 78-68 win against DePaul. Ellison was one of four Johnnies in double figures that day, and the win helped the Red Storm surpass the team’s season total from the 2015-2016 campaign. Ponds and Ahmed scored 14 points apiece, and Owens was a rebound shy of a double double. “I had a good warm-up,” said Ellison after the game. “I have to give credit to my teammates because they found me. I had a lot of open looks and I knocked them down.”

Taking on Seton Hall at the Prudential Center, St. John’s met the Pirates in the 96th all-time meeting between the two programs. Sunday’s game wasn’t as close as Seton Hall’s one-point win last year, as the defending Big East champions led by as many as 27 en route to an 86-73 win. LoVett scored a team-best 22 points, tallying his seventh 20-point game this season. Seton Hall hit 52 percent of their shots from the floor in the contest. A 15-5 run in the first half put them up 24-15 with eight minutes remaining. Another 22-9 run soon thereafter put St. John’s behind 46-26 at halftime. Despite cutting the lead to 12 on several occasions in the second half, St. John’s (9-12, 3-5 Big East) could not hold on, as Seton Hall snapped their streak of three straight conference losses.