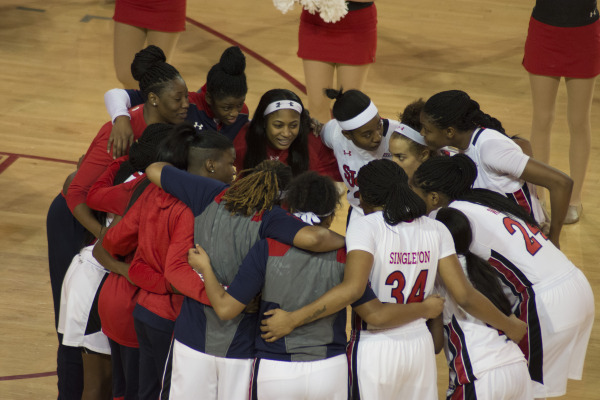 It was a successful break for the Red Storm as they began Big East play. (Photo Credit: RedStormSports.com)

Just over a month ago, the St. John’s student body left the anonymity of their dorms, put their MetroCards down and tossed their car keys away, content to spend the next five weeks resting at home after an arduous fall semester.

For the women’s basketball team, though, the work had just begun. A 5-3 stretch while the University closed shop, culminated last week with senior forward Jake Walker registering her 1,000th career point, a figure that only 22 other women have reached in school history.

The milestone came in the first quarter of the Red Storm’s 55-50 loss to Villanova on Jan. 15. Walker finished that game with 13 points, but the Red Storm couldn’t finish with the win. They let the back-and-forth affair slip away in the fourth quarter after being up by two with less than two minutes left in the third.

Their off-putting effort was a far cry from some of the other efforts that the Red Storm put forth over the break. They handled Xavier, 65-48, in their first game of 2017, on the back of highlight-reel performances from their senior leaders. Walker, the team’s leading scorer at 14.2 points per game, poured what was a career-high 24 points on 10-for-15 shooting.

She was open all game long thanks to some brilliant passing from senior guard Aaliyah Lewis. She dished out a career high 13 assists, the largest total for a Red Storm player since 2013.

Walker shattered her career high the next week in a 70-64 victory over Marquette. She dropped 32 points and grabbed a season-high nine rebounds in the friendly confines of Carnesecca Arena.

Not to be outdone, Lewis poured in 21 points and 10 assists, and junior forward Imani Littleton had a career-high six blocks in the same contest. The Red Storm held Marquette to 29.7 percent shooting.

“Jade did a great job of being a factor inside and I thought Aaliyah controlled the game from the point,” said Head Coach Joe Tartamella. “Every game is kind of interesting to watch and see how we play. When you have depth and have the ability to go to other players, where maybe in the past we haven’t, you really see who is going to step up that day.”

Despite breakout performances like these, the Red Storm could not separate themselves from the pack in the Big East over this eight-game stretch. Big wins were negated by crushing losses, like one to DePaul that cut that three-game win streak short.

They also lost to Seton Hall, who has since fallen below-.500 and just won their second conference game last Friday. They shot just below 36 percent from the field.

As of Friday night, St. John’s sits at fifth in the Big East (4-4 in conference, 12-7 overall), and still have to play all four teams in front of them again. With school back in session in Queens, it is time for the Red Storm to turn it up a notch with an eye towards the postseason.