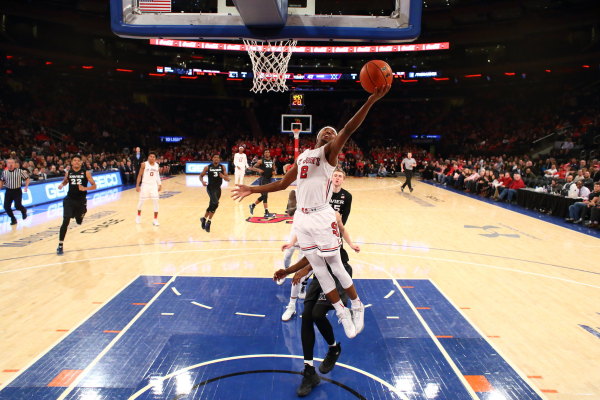 “[Xavier is] one of the top-25 teams in the country and they had us down by 15,” Mullin said. “That is something that can balloon to 25, but we came back to get within three. That is progress.”

It was what happened after they trimmed that lead down, though, that took the life out of an invigorated crowd at Madison Square Garden.

With Xavier’s star point guard, Edmond Sumner, in the locker room with what seemed to be a devastating knee injury and all the momentum on their side with four minutes to go, the Red Storm let Trevon Blueitt and Quentin Goodin carry the Musketeers to victory.

The duo scored nine of Xavier’s last 10 points as their lead re-blossomed to as many as eight with two minutes left, sealing the deal after the game looked like it was going to end in favor of the home side.

St. John’s was down by 12 when Sumner left the game, but their journey back from the dead started a minute prior. Redshirt sophomore forward Tariq Owens came up with equally eye-opening blocks on back-to-back layup attempts by Xavier. Marcus LoVett ripped the ball away from J.P. Macura and finished off the coast-to-coast break with a layup, starting a 13-5 run for the Red Storm which ended up being too little, too late.

“We were searching all night for some type of rhythm. We started getting downhill a little bit, getting to the paint and were in the bonus,” Mullin said. “Our activity picked up and they didn’t maintain their offensive flow. Some of it was [Xavier} missing shots, some of it was our defense; it was a combination of both.”

Owens’ defensive urgency was needed in the second half. The Musketeers shot over 48 percent over the final 20 minutes to preserve their seven-point halftime lead after a first half filled with questionable foul calls on both teams.

Owens himself was charged with a pair of early fouls but still posted seven points, six rebounds and four blocks until he fouled out with 46 seconds left.

Besides the 56 combined fouls, the game was marred by independent stretches of inconsistent offensive play and subpar interior play from the Red Storm that resulted in a 45-26 rebounding shortage. Foul troubles may have actually kept St. John’s in this game; Xavier shot under 70 percent from the line, while the Red Storm converted 75 percent of their tries.

Still, a second half surge against a top-25 team is not something to write off. The effort they displayed in the final five minutes bodes well for the young team, especially heading into the end of the regular season.

LoVett, the team’s second-leading scorer, shot 4-for-11 in 36 minutes of action, indicative of a team that shot just over 33 percent in the first half and 21.7 percent from beyond the arc in the game.

“We aren’t as aggressive as we should be,” he said postgame. “If we were more aggressive we would have started off pretty well. I believe in my team.”

The Red Storm is back in action on Feb. 1 against Marquette, who defeated Villanova last week, at the Garden.