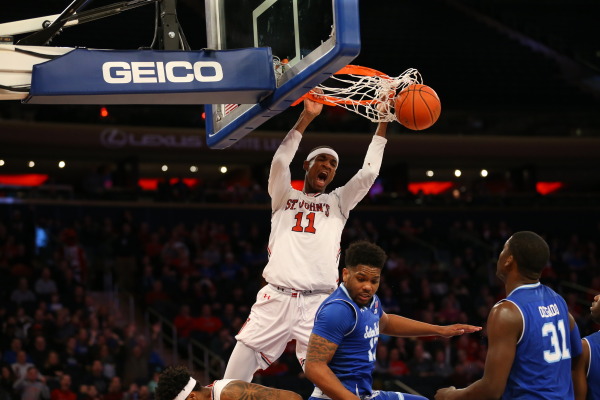 Believe it or not, after 13 games of Big East play, the St. John’s Red Storm have somehow snuck their way into the top half of the conference standings.

St. John’s (12-14, 6-7) picked up its sixth win in conference play on Feb. 11 with a 78-70 victory over Seton Hall at Madison Square Garden. The win has the Johnnies locked into a tie for fifth place in the Big East with Marquette, a team that they have already defeated once this season.

The Johnnies showed on Saturday what a difference a few weeks can make. Just 20 days after Seton Hall handled the Johnnies in an 86-73 blowout, the flow of this game was almost the exact opposite.

The two rivals went back and forth for a majority of the first half, but the Red Storm dominated the final five minutes of the half to the tune of a 16-3 run, giving them a 37-27 advantage at the break.

Once the second half got going, the Pirates trimmed the lead down to just six before the 16-minute mark, however that was the closest that they would get for the remainder of the afternoon. An 11-2 St. John’s run in just over three minutes ballooned the lead to 15, an advantage that the Johnnies were more than capable of holding on to.

The Red Storm led by as many as 16 in the second half, and their lead was not cut down to single digits again until there was just 4:10 remaining. The lead was still nine with just over two minutes left, but four points in those final two minutes from Tariq Owens helped put the game away.

It was fitting that Owens was the one to ice the game for St. John’s, considering that he had one of his best games in his short time with the Red Storm on the afternoon. He scored 10 points, grabbed 12 rebounds and swatted away four shots, including a thrilling sequence in the first half that featured a block on the defensive end and a put back dunk on the ensuing offensive possession.

“We got off to a slow start offensively, but our defense was there. It brought energy in the building and to our team too. From there our defense picked up its pressure and [started] forcing turnovers,” head coach Chris Mullin said about the string of events.

But perhaps the biggest contribution that Owens brought to the victory was helping slow down Seton Hall big man Angel Delgado. The 6-10, 240-pound Delgado had his way in the paint in the first meeting between these two, scoring 21 points and grabbing 20 rebounds. However Owens and his frontcourt mate Kassoum Yakwe were able to hold Delgado to just 13 points and 10 rebounds on Saturday, keeping the Seton Hall offense from really ever getting going.

On the offensive end, it was the usual duo that led St. John’s to victory. Marcus LoVett led all scorers with 19 points, while Shamorie Ponds followed closely behind him with 17 of his own. The two did most of their scoring by attacking the basket, as they combined to shoot just 1-4 from three-point range.

“We wanted to attack the paint from the start. Part of our approach today was to get in the paint,” Mullin said. “They’re more position defenders with not lot of shot blockers.”

The play of LoVett and Ponds to this point in the season has not gone unnoticed by pundits across the country. The two have earned a few comparisons to Kentucky’s elite duo of Malik Monk and De’Aaron Fox as the best freshman backcourt pair in the nation.

However for now the focus for this team remains finishing this season strong, to put themselves in the best possible position to make some noise in the Big East Tournament next month.

“We’re taking a step every day,” LoVett said. “Slowly, we’re progressing and that’s what we talk about in practice and the coaches stress just trying to get better each and every day in practice.”

That progression will continue this week, when the Red Storm will face the two teams directly ahead of them in the conference standings in Butler and Marquette. A win in either or both of those tough road games would do wonders for a young St. John’s team that seems to be gaining more and more confidence with each passing game.