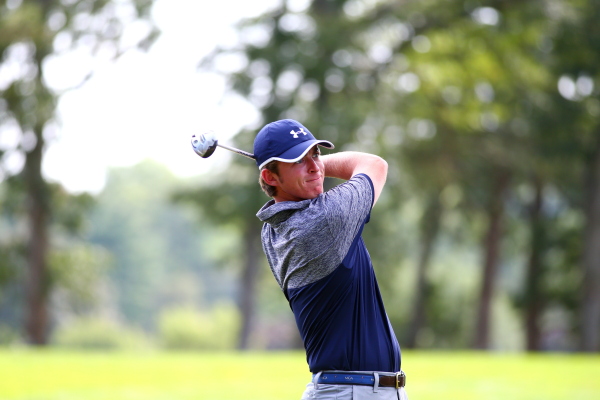 Sean Byrne is one of the three seniors on the Red Storm roster this season. (Photo Credit: RedStormSports.com)

The St. John’s men’s golf team is excited to begin a new spring season coming off a successful fall season filled with potential.

During the fall, the team placed in the top-10 in every invitational and tournament they attended, including a fourth place showing in their final invitational of the season, the Lehigh Invitational.

Sophomore Andrew Baek placed third at the Alex Lagowitz Invitational in September, while freshman Gerald Mackedon finished his season off in October with first place at the Connecticut Cup and second place at the Lehigh Invitational.

“He’s gotten a lot more comfortable with the other players on the team and that’s how he’s been able to flourish here. He’s got a big future here,” Coach Mal Galletta said about Mackedon.

Now the Johnnies look forward to this coming spring season, starting Feb. 25 when they will attend the Loyola Intercollegiate in Arizona. They have had access to the golf room in Carnesecca all winter which has allowed them to continue practicing, albeit not an actual course, through the cold weather.

“We like to get into the golf room five days a week to keep our game sharp,” Coach Galletta said. “They already got out onto the course for practice once and plan on returning once more during days in which the temperature reaches the 50s.”

As their tournaments approach, Galletta says that, “The goal is to eliminate high rounds. So everyone has to focus on their own game and it will help the team.”

Baek and Mackedon both are looking to lower their stroke average, and also become more consistent.

The team will head to Dallas on March 14 for the Bob Sitton Invitational, then to Villanova March 27 for the Wildcat Invitational.

In April the Red Storm has three tournaments in the span of one week, going from Yale to Rhode Island then down to Navy.

This doesn’t worry them, as they feel great about the schedule. Coach assures that the team’s grades aren’t a concern for them either, as they have the highest GPA of any team on campus and an incredible work ethic.

They finish their season off with the tournament they look forward to the most, the Big East Tournament from April 30 to May 2.