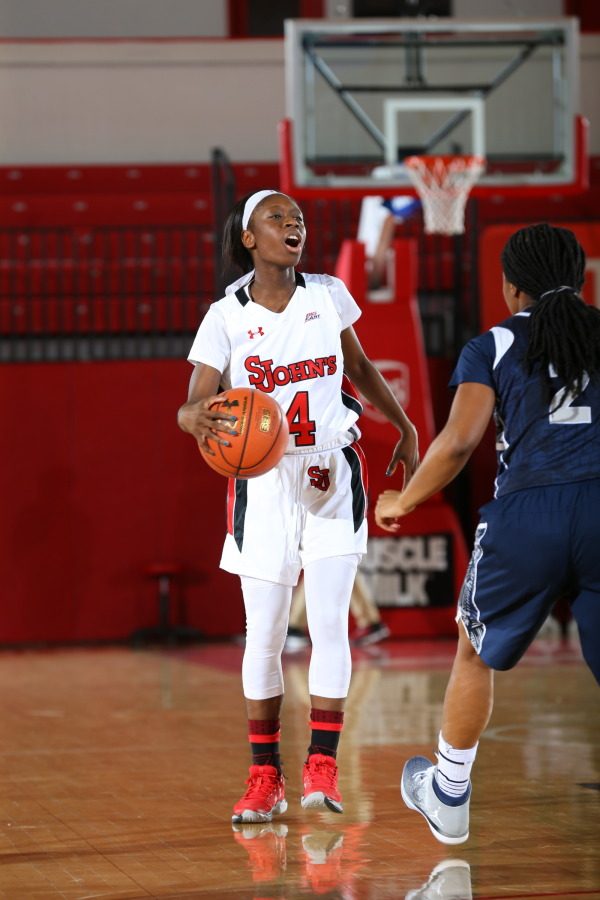 Aaliyah Lewis led the Red Storm in scoring in their win over Providence. (Photo Credit: RedStormSports.com)

The St. John’s University women’s basketball team finished off their road games in Big East conference play this weekend, winning at Providence, 71-47, and losing in Omaha to Creighton, 67-60.

The Red Storm were led across both games by senior forward Jade Walker, who averaged 16 points and eight rebounds in the two games.

On Friday night in Rhode Island, the Johnnies got out to a fast start and never looked back. On offense, the team established a presence in the paint through Walker, leading to more space on the perimeter for the guards. Despite Walker getting in foul trouble, senior guard Aaliyah Lewis picked up the slack. Lewis had eight points in the first quarter alone, while the entire Providence team only had six.

“I thought we really locked in and guarded well, which allowed us to control the tempo of the game,” Coach Joe Tartamella said after the game. St. John’s held the Friars to just under 38 percent shooting from the field and forced them into 13 turnovers.

Lewis was joined by teammates Walker and Akina Willere in double figures, while junior college transfer Maya Singleton chipped in nine points and 11 rebounds in 32 minutes. St. John’s led by as many as 25 points, reflecting the control of the game that Tartamella noted.

Then the team traveled to Omaha on Sunday to take on the Bluejays of Creighton, who were ranked second in conference play. It was senior day at D.J. Sokol Arena, and the early minutes reflected that emotion. The game had a frenzied pace at the beginning, with Walker leading the scoring in the opening minutes of play. However, the Red Storm struggled to keep the Bluejays out of the lane, which put St. John’s on the back foot.

The Creighton guards were able to control Lewis on the offensive end, forcing her to be more of a facilitator after her 17-point outing in Providence. Lewis was held to only nine points and four assists.

The team was able to fight its way back behind Alisha Kebbe, Wellere and Singleton, taking a one-point lead with about three minutes left in the third quarter. Kebbe and Wellere both finished in double figures with 10 and 12 points, respectively. Singleton had a double-double, doing most of her damage in the third quarter. She finished the game with 12 points and 10 rebounds.

Despite St. John’s effort on the defensive end, Creighton’s backcourt of Marissa Janning and Sydney Lamberty proved to be too much to handle. Anytime the Johnnies took a slight advantage, the Bluejays’ guards had an answer. Janning had 20 points, while Lamberty had 17 on six-of-nine shooting. Creighton also did their damage from the free throw line scoring 26 points, while St. John’s only scored 19.

St. John’s finishes conference play next Sunday at Carnesecca Arena for senior day against the Seton Hall Pirates. Last time these two met, the Pirates prevailed 64-59. The Red Storm are currently slated for the fifth seed in the Big East Tournament.