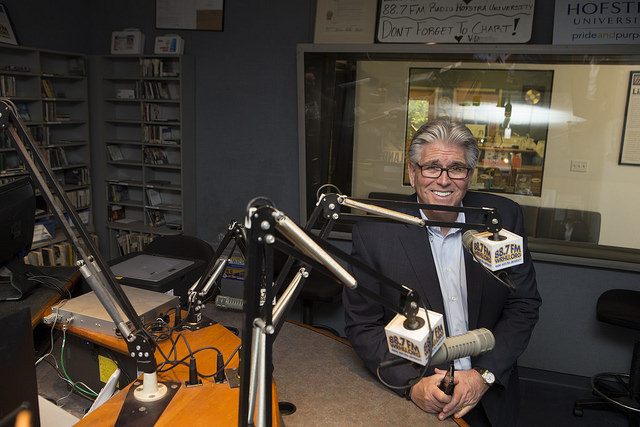 He has been the voice of New York City sports fans for over three decades.

Fans know every version of his show’s iconic jingle by heart and can imitate his distinct New York accent almost on cue. There is even an annual festival in New York City bearing his name where fans can pay homage.

That name, if you haven’t guessed it already, is Mike Francesa, arguably one of the greatest sports talk radio hosts of all time. Francesa, a St. John’s alumnus, is noted as one of the major reasons why WFAN Sports Radio in New York City has grown into the nationwide powerhouse that it is today.

After 30 years at the FAN, Francesa, 62, will be moving on to the next stage in his career in November. But the king of sports talk radio’s career to this point has been marked by decisions that even he couldn’t have planned out.

That theme stretches all the way back to Francesa’s childhood. Growing up in a poor New York City family, his career goals were typical for a sports-loving kid.

“I wasn’t one of these guys who grew up with a tape recorder, wanting to be a play-by-play guy or wanting to be a broadcaster,” he said. “I was like a typical kid, you know, as a youngster I was a player.”

As that goal went by the wayside once he got older, Francesa set his sights on a more practical career path. He began studying athletic communications and playing baseball at the University of South Florida, but returned back north after a knee injury his first semester.

After deciding that he would not be returning to South Florida, Francesa enrolled at Hofstra. His time at school on Long Island, however, lasted even shorter than it did in Florida.

“I actually enrolled at Hofstra for a day, and then when I looked deeper into St. John’s, I actually asked Hofstra to release me, which they did,” he said. “I thought the St. John’s communications program fit me better than Hofstra did… So I actually went to Hofstra for one day.”

Despite not being a member of the school’s radio station or TV Club, Francesa did value the experience that he received in his years at St. John’s. He noted former broadcasting professor Bob Wolff as one of the major influences on his career.

Francesa’s big break came in 1980 when he was given a job as a researcher with CBS. He excelled in this role working with CBS on-air talent like Brent Musburger and Jimmy “The Greek” Snyder, calling himself Musburger’s “right-hand man.”

In 1987 when WFAN launched as the nation’s first 24-hour sports talk radio station, Francesa decided to try his hand at radio. Never before interested in appearing on the radio, he was denied a job originally.

Eventually though, he persisted and was given a job with the new company. That is where the cliché of this story, “the rest is history,” finally comes into play.

Francesa was teamed with the eccentric Chris Russo to form a pair billed as “Mike and the Mad Dog.” But working with a partner was not something that he was interested in at the time.

“I was reluctant to do it, I was against it at the beginning when they first told me that I could go to afternoon drive but then I would have to be teamed with him,” Francesa said on the pairing. “When it first started I didn’t think it would work very well.”

And at first, Francesa was correct in his thinking. In their first few episodes, the duo frequently talked over each other as listeners could hear their disdain about this radio “arranged marriage” echo through the airwaves.

But over time, “Mike and the Mad Dog” found its groove. Francesa and Russo were “overnight hits,” and the two skyrocketed to the number one spot in New York within nine months.

From 1989 until 2008, “Mike and the Mad Dog” ruled the New York sports talk radio scene. Francesa and Russo’s contrasting styles played beautifully off of one another, and the duo took home a Marconi Award, the highest honor in radio broadcasting, in 2000.

“We were always really able to be the guys who kind of were there to be the witnesses and to chronicle all the big sporting events,” Francesa said. “So that’s what ‘Mike and the Mad Dog’ was synonymous with doing.”

But all good things must come to an end, and for “Mike and the Mad Dog,” that end came in 2008 when Russo was granted a release from his contract and signed a new deal for his own show on Sirius XM Radio.

With Russo’s departure, the time came for Francesa to begin hosting the show solo, as “Mike and the Mad Dog” was transitioned to “Mike’d Up,” and later, now currently, “Mike’s On.”

Despite having experience hosting a Sunday morning football show solo, Francesa admitted that he did feel some pressure to keep his main show at the prominent rank it had been at for nearly two decades with Russo.

“I had always done a show by myself on Sunday morning anyway,” he said. “But the idea of whether or not I was gonna be able to keep our show by myself at the same level was really gonna be the key. And fortunately that happened.”

Russo and Francesa have since reunited a handful of times, including for a show that sold out Radio City Music Hall last year and a one hour special on radio row for this year’s Super Bowl.

Now in his final months at the company that he has called home for the majority of his career, Francesa is beginning the reflection period for his stellar career at WFAN.

And in between checking off events, Francesa will also have the opportunity to hold meetings regarding his future employment, something that he vows he hasn’t done since the 1980s.

Francesa leaving WFAN also means that the arguably most coveted seat in sports talk radio is now up for grabs. While an official replacement hasn’t yet been made, rumors have been swirling the internet for months.

Who knows? Maybe the next Mike Francesa could be someone walking the halls of St. John’s right now, just as he did decades earlier. If that is the case, Francesa offered up some advice for anyone aspiring to one day be in his shoes.

“You can’t fool the audience, they know what’s real and what’s fake, they know the difference. And they’re the ones that count; in essence, they are the ones who decide,” he said. “The best thing about what I do is, you get a report card, you get judged, you know if you’re doing a good job or not because your job is to get ratings… if you don’t get ratings, and you don’t provide revenue, you’re not gonna be there.”