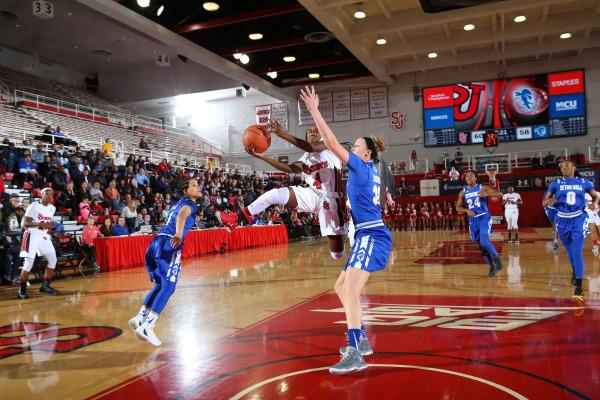 After a loss in Milwaukee to number 18/17 DePaul on March 6 in the Semifinals of the Big East Tournament, the St. John’s women’s basketball team’s quest for a return to the NCAA Tournament likely ended. The Johnnies posted a 19-11 overall record, including 11 conference wins.

After an upset of the higher seeded Villanova Wildcats the day before, the Johnnies struggled to contain Jessica January, who finished the game with 20 points en route to a 59-41 victory for the Blue Demons.

Despite the loss, there were a lot of positives for the Johnnies throughout the season. Head Coach Joe Tartamella picked up his 100th win at St. John’s with a 60-50 home win against Providence. Tartamella became the fifth coach in the program’s history to do so.

The team’s first big win came against cross-city rival Fordham, in which the Johnnies pulled away for a 59-45 win against a team with a current 21-11 record. St. John’s found themselves extremely competitive once conference play started. The team’s highlight of the conference season came when completed a season sweep of Marquette, a team that only has five losses in the league.

Leadership from the upperclassmen was a constant theme throughout the entire season for the Red Storm. Senior guard Aaliyah Lewis was a perpetual floor general, averaging just over 11 points per game while tallying 190 assists compared to 84 turnovers. Lewis also led the team in minutes with just over 37 per game. Last Wednesday, Lewis was named to the Big East All-Tournament team. She averaged 18 points, four rebounds and three steals across the two games.

Inside the Johnnies were led by Jade Walker, another senior, and juniors Imani Littleton and Maya Singleton. All three players averaged over five rebounds a game, while Littleton led the team averaging over six boards a game. Walker was the team’s leading scorer with 13.7 points per game. She was named to the first team all-conference, while Lewis was named an honorable mention.

Despite losing Lewis, Walker, Kendyl Nunn and Sandra Udobi to graduation, the Red Storm should be confident heading into next year. Alisha Kebbe returns, who was named to to the Big East Freshman team, and was named a Big East Freshman of the Week four times. The Philadelphia native averaged over 11 points a game, while hitting her career high of 17 against Seton Hall at the end of February. The team also returns Akina Wellere, who was the team’s best three-point shooter. Wellere shot at the three ball at a clip of close to 50 percent. The team also bolsters the roster with recruits like McDonald’s All-American Qadashah Hoppie and forward Kayla Charles.

As far as a tournament bid, St. John’s struggled against ranked opponents this season, losing all five games. However, the team also does not have any particularly bad losses. They will have to bank on their lack of bad losses to receive the at-large bid to extend their season.