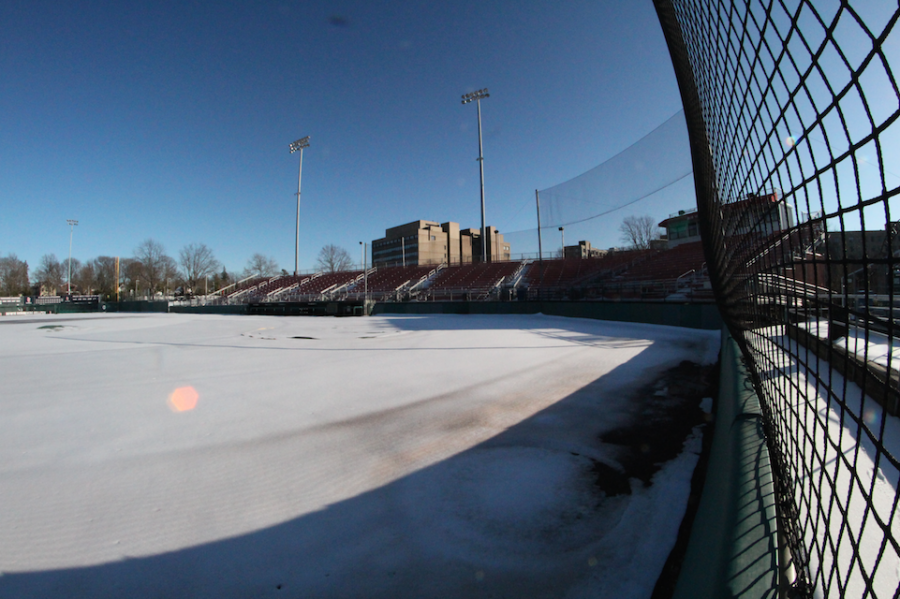 While most in the New York City area hunkered down, preparing for what was supposed to be the biggest snowfall of the winter, a few St. John’s coaches stood face-to-face with some season-altering dilemmas.

Although Winter Storm Stella spared Queens from the worst of its terror, several Red Storm teams had their games blown away by the blizzard-like conditions.

With Jack Kaiser Stadium and the Red Storm Field left unplayable due to the snow, a total of nine games were cancelled between the baseball and softball teams.

The softball team had to cancel the St. John’s Invitational, a weekend-long tournament featuring the Johnnies and four other teams from the New York City area. Five Red Storm games were wiped out, including matchups between the four other teams.

Head Coach Amy Kvilhaug said that she monitored the storm for several days leading up to the weekend.

“Being a softball coach means also being a part-time weatherman,” Kvilhaug said via phone interview. “Whenever you’re hosting something, I think it’s important to almost over-communicate… I want to give [other teams] a say.”

Cancelling the invitational was the last resort, Kvilhaug said. She was open to relocating the games if it meant her team could get on the field, and spoke to colleges and universities as far as Delaware.

“We tried so many different options and kind of kept striking out,” Kvilhaug said. “Then I said, ‘Okay, this is not going to work out.’”

Once Kvilhaug pulled the plug on the weekend’s slate of contests, Kvilhaug revived the Red Storm’s weekend by agreeing to a pair of games at Radford University in Virginia, where she coached softball for four years.

“We finally got in touch with Radford by the advice of one of my pitchers who is from Virginia,” Kvilhaug said.

Kvilhaug also managed to fit in a game against Maryland on Monday, cutting their workload from five games in three days to three games in two days.

For the softball team, the imperative is to play. “We don’t want to be up here twiddling our thumbs when it’s the middle of the season,” Kvilhaug said. “The tough part is you don’t have a set number of games to play. People don’t get as much work in as you head into the Big East.”

The Red Storm baseball team was supposed to host NYIT on March 14, but those plans quickly changed with the blizzard set to begin that night.

The storm front caused the Red Storm to cross out a weekend three game series against Holy Cross on top of the March 14 cancellation.

Fortunately for St. John’s, though, they found a temporary home. The ninth-ranked baseball team in Division I traveled to Norfolk for a makeshift tournament against three other teams who had their schedules altered due to Winter Storm Stella.

The lacrosse team, which nearly upset the mighty Syracuse Orange last week, faced a tricky dilemma too, but the Red Storm pressed on with their matchup with Drexel on March 18, with the snow shoveled into mountains on either side of the field.

March came in like a lion this year, unforgiving in its ice-cold demeanor. With the storm safely behind them, the Red Storm can look forward to ending the month with the same intensity that Mother Nature had last week.