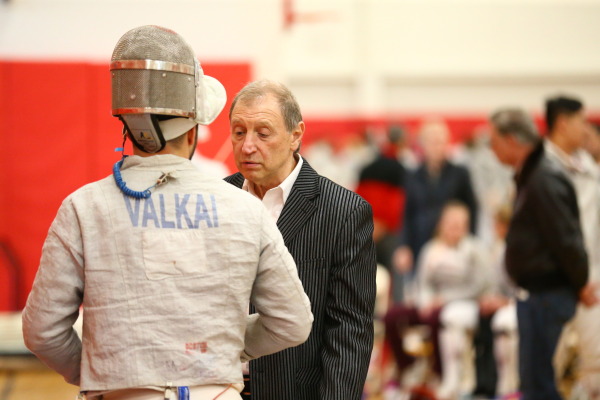 This year, eight St. John’s fencers qualified for the NCAA Championship. It will be taking place from March 23-March 26 at the Indiana Farmers Coliseum, hosted by the University of Notre Dame. 144 fencers from 27 schools will be competing in a round-robin format of five-touch bouts. Once it reaches the top-four, it will switch to 15-touch bouts.

Hungary native Ferenc Valkai and senior Mathilda Taharo are no strangers to the NCAA Championship. Taharo seeks to put a strong finish on her fencing career, but Valkai has a little bit more riding on this.

This is Valkai’s fourth time to the NCAA Championship. In his last three years, he placed second. This year, he plans to end the cycle.

“Obviously when I made it to the top four and then I made it to the final I tried to do everything to win and I didn’t. I got second which is a very good result, but being second three times is kind of annoying,” Valkai said. “I’m very emotional so it kind of affects me a lot but I just go as hard as I can and I fight as much as I need to and I want to finish my last season knowing that I did all the work and I did everything that is possible to do the best.”

Taharo and Valkai have been preparing all season for the championship, despite only finding out that they qualified a little over a week ago. Both agreed that it’s crucial not to over practice the week leading up to championship. Valkai explained how regionals is the perfect practice going into the championship because it’s 23 bouts all in one day and now he’ll only be nitpicking his technique as not to tire himself out.

Taharo talked about being very stressed out and nervous for the NCAA Championship, but she tries to keep herself focused by taking her bouts one touch at a time. She’s working to improve on a third-place finish in last year’s Championship.

“I’ll try to be more confident in myself and in my skills and what I can do,” Taharo said.

She also plans on taking time to enjoy this competition as it will be the last of her 12-year fencing career. She explained how this competition will have a “special taste” and she’ll be doing it for her mother and late grandmother who have always been her biggest supporters.

With a possible Olympic berth in his future, Valkai put his plans for the NCAA Championship very simply. All he said is, “I want to win.”

As for Taharo, to cap off her career as a fencer she has only two words for her opponents, “Be ready.”

Keep an eye out for these Johnnies and more in the NCAA Championship.