St. John’s women advance to WNIT Round of 16 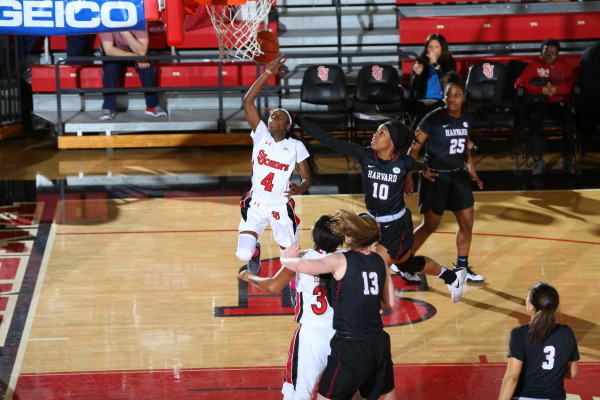 Aaliyah Lewis had a game-high 16 points in the Red Storm's Second Round win. (RedStormSports.com)

In a year that was expected to be a rebuilding campaign after losing their two leading scorers and two of the best players in program history, the St. John’s women’s basketball team is on their way to the WNIT Round of 16 following two home wins over the weekend.

The Johnnies blew out Sacred Heart, 72-43, in their opening round match-up in Queens on Friday evening and continued their success on Sunday afternoon at Carnesecca Arena as they squeaked out a 62-57 win over Harvard.

Against Sacred Heart, the Red Storm was sensational on both ends of the floor in the second half to pull out a blowout victory. However, it wasn’t easy by any stretch of the imagination. St. John’s led just 16-12 at the end of the first quarter and by just two at the break. They struggled to shoot the ball, making just 31 percent of their shots in the second period and 25 percent of their three pointers.

But the game completely flipped in the second half.

They held Sacred Heart to just 18 second half points (nine in the third quarter and nine in the fourth) while Jade Walker (18 points on 9-of-19 shooting and nine rebounds) and Akina Wellere (18 points) led the way on the offensive end of the floor.

“It was a tale of the second half,” head coach Joe Tartamella said to RedStormSports.com. “I thought the first quarter we were able to do some good things. I thought we kind of got out of not playing for a bit, trying to get our feel and our rhythm…I was really pleased with how we came out in the third quarter and scored 29 points and held them to nine points in both the third and fourth quarter, that was a testament to our players and their ability to come out with better focus.”

In the second round, the Johnnies faced a tougher task in the Harvard Crimson. St. John’s led by just six points at the break and 55-53 with just under three minutes left in the fourth quarter but they responded to the adversity by outscoring Harvard, 7-4, in the final 2:30.

“I noticed it was a close game in the fourth quarter. In my head, I was just saying it’s time to get it done,” Aaliyah Lewis said via RedStormSports.com. “We have to get everybody on the same page and come together, everybody play their part and we have to get this win.”

Lewis led the Johnnies with 16 points on 4-of-11 shooting, eight assists, five rebounds and just a single turnover in 40 minutes of play. The Red Storm also received solid production from Maya Singleton (13 points and nine rebounds) and Wellere (nine points on 4-of-13 shooting).

St. John’s has to be pleased with their performance given the fact that their leading scorer, Walker, scored just six points and recorded zero rebounds.

Next up for the Red Storm is a Round of 16 match-up against the Michigan Wolverines on the road on Thursday evening. The Wolverines are led by former St. John’s head coach Kim Barnes Arico and are the number one seed in St. John’s portion of the bracket.