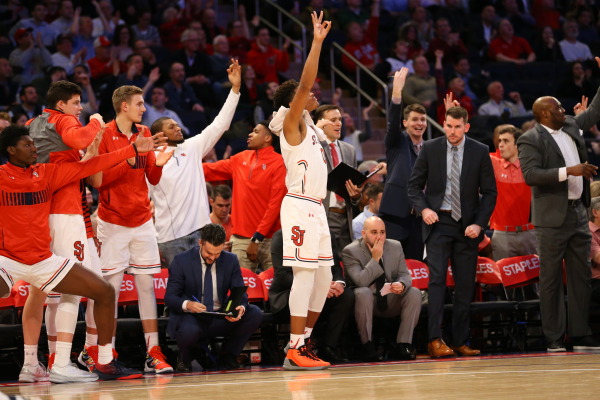 The St. John’s men’s basketball program announced that sophomore guard Malik Ellison and graduating senior Darien Williams have opted to transfer out of the program. Ellison will have to sit out one year at his next destination before maintaining two more years of eligibility. Williams will be immediately eligible at his next school as he is a graduate transfer.

“We want to thank Darien and Malik for their contributions to our basketball program over the past two years,” head coach Chris Mullin said in a statement. “We wish them much success in their future.”

Ellison had two solid years under Mullin. During his freshman campaign, the 6’6″ wing started off slowly after battling an early season foot injury. However, as the year wore on Ellison became one of the most improved players on the roster, attacking the basket with confidence and making plays for his teammates. He finished his freshman campaign averaging 7.3 points, 2.6 assists, 2.5 rebounds and 0.4 steals per game while shooting 37 percent from the field and 32 percent from beyond the arc.

In year two, Ellison developed into one of the best two-way players on the roster as he guarded the opposing team’s best player and held a key role on the offensive end of the floor as a ball handler and scorer. His sophomore season ended with Voorhees, NJ native averaging 7.4 points, 3.3 rebounds and 2.5 assists per game while shooting 42 percent from the field and 34 percent from three.

“I would like to thank the coaching staff and administration for supplying a family atmosphere and allowing me to better myself as an individual,” Ellison said via a release. “I also would like to thank all my teammates with whom I spent a great two years with and developed strong bonds that I hope to continue in the future. Obviously, this was a difficult decision, but my family and I have decided it is best for me.”

Ellison’s departure could mean good things in regards to rising sophomore guard Marcus LoVett, who is still deciding whether to return or take his talents to the professional level. If LoVett does return (which seems to be the expectation), he will form a potent backcourt trio that consists of himself, Shamorie Ponds and Arizona transfer Justin Simon. Federico Mussini will also factor in as a shooter off the bench.

Meanwhile, Williams transferred to St. John’s after spending two years playing JUCO. He sat out his junior year (first year in Queens) with a shoulder injury but showed some potential as a stretch four. The 6’8″ California native was not expected to play a big role with the Red Storm in 2016-17, however, he suddenly became one of the most surprising contributors on the roster.

Williams had career games against LIU Brooklyn, where he scored 15 points on 4-of-6 shooting and grabbed seven rebounds, and against Georgetown in the Big East Tournament when he added 10 points in 18 minutes. He finished the season averaging 3.8 points and 2.6 rebounds per game but most importantly, he brought energy off the bench and provided the Johnnies with an interior punch that they lacked throughout the year.

“St. John’s is a great place,” Williams said in a press release. “It has been an honor to be part of a program with such history and tradition. I want to thank Coach Mullin and the coaching staff for giving me the opportunity to share some great memories and earn my degree from such a highly-regarded University.”

St. John’s has three open scholarships with the transfers and are expected to explore the recruiting trail and transfer market in the coming weeks and months.