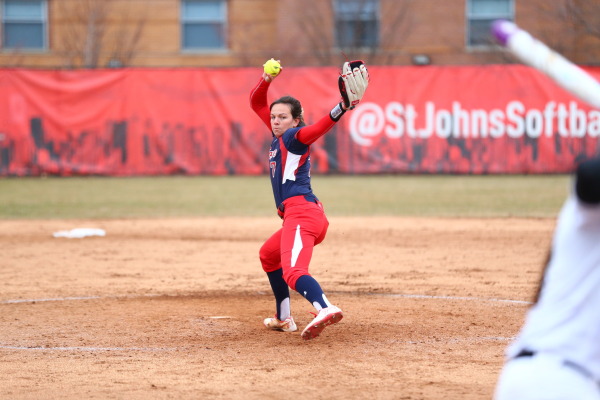 Hailing from Luverne, Ala., St. John’s softball pitcher Tori Free entered her freshman season in 2013 and quickly turned heads around the Big East. She finished the season with a 2.65 ERA, earning her Third Team All-Big East honors.

She followed up on an impressive rookie campaign with another strong season. In her sophomore year, Free was named to the Second Team All-Big East.

In 2015, she continued to improve as a junior. Free went 7-1 on a 0.90 ERA in conference play and 11-8 on the season with a conference-low 2.33 ERA in 120 innings of work. She was given the honor of Big East Pitcher of the Year and earned a spot on the Big East All-Tournament Team.

She was on the rise and primed for a stellar senior year in 2016, starting with 31 strikeouts in 35 innings, when in early March, she sustained a season ending injury to her arm. It was at first a crushing blow to the team and to Tori as the excitement for her senior year had grown.

“It was very frustrating in the beginning. I should have been cleared for last season, but the weeks kept being pushed back due to pain,” Free said. “I was in the training room constantly trying to get myself back to where I needed.”

But Free learned to push through the frustration of this hurdle she faced in her career. As she watched her fellow teammates continue the season without her, she remained focused on her return to the mound.

“Our pitching staff picked up my slack very quickly and I think they did a wonderful job [while I was injured],” she said.

As the new 2017 softball season begins and Free returns to the active roster for her redshirt senior season, her confidence grows as the season progresses. Her pain has decreased with the help of the training staff and she is once again comfortable pitching.

“More recently I have learned how to ignore that feeling, and push through,” she said. “My coaches and trainers have made sure to get me the appropriate gear to ensure that I have the least amount of discomfort possible.”

This is not the first time Tori has had to make an adjustment to an intimidating challenge. Moving from Alabama to New York City was very hard for her at first.

“I literally looked down at all the lights on my flight in and asked my mom if she was sure she wanted to leave me here,” she said. “Once softball season started it became easier. You become a family with all of the other girls.”

Getting back on the field and acquainted to her new teammates, she was finally able to feel at home in Queens and overcame the daunting challenge.

Free is now back in action for the Johnnies and is looking to carry her dominance on the mound into this season.

“I have very high expectations for this team. I think that the team will go far, we just have to put all of the pieces together,” she said.

Free has her sights set high and she wants to lead the Red Storm to another Big East Championship and finish off her career with a ring.